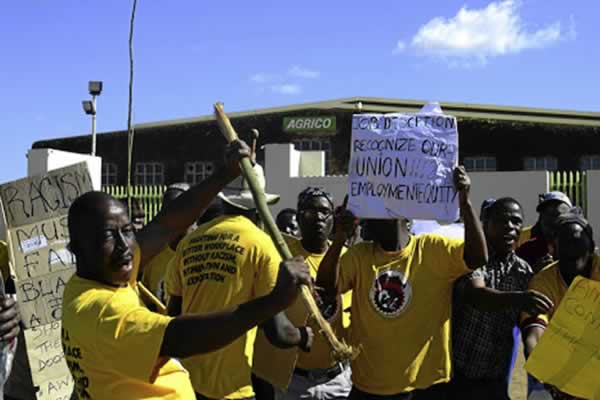 Black employees at a North West farming equipment manufacturing factory are allowed only a minute in the toilet and no tea and smoke breaks.

These were some of the grievances of more than 100 workers of Agrico in Lichtenburg who protested yesterday, saying these rules did not apply to their white colleagues. But the company says the measures are not racist and are meant to improve productivity.

The employees said the company has a biometric system with a timer that monitors how much time each person spent in the loo when nature called.

One of the protesters, Israel Khuduga, said the time they were allowed to spend in the toilet was not enough.

"Nature does not have colour, one minute is not enough," he said.

The factory workers said that if they spent longer than a minute, a manager would come in to get them as they were told they were delaying production.

Another worker, Albert Tshabadira, said he was just working in order to provide for his family but the conditions were not favourable. "It is not nice, we are always scared and work under severe pressure."

They were also not allowed to use their cellphones during working hours. They downed tools on Friday, demanding better working conditions.

They also claimed that due to the pressure they were put under, some of their colleagues had died and others had lost fingers on duty while operating the machines.

A third protester, Steven Molebatsi, said he lost two fingers and was never compensated. "They shouted at me and said I must work fast, the machine cut off my fingers, they never paid me for that."

The workers said they felt oppressed because whites were allowed to take as long as they wanted in the toilet, and to have smoke and tea breaks as they wished.

Agrico's technical director Ronald Andrug said they did not want to be mean to their employees but had to put strict measures in place after they noticed people were spending hours in the loo.

"We installed a clock reader to check on whether everyone had been honest, it's not that we are being mean. We are not been unreasonable about it."

Andrug said the company decided on the clock reader five years ago after they discovered that an employee had spent almost 40 hours per month in the toilet.

He said company policy did not allow workers to smoke but they could do it during lunch time.

"If you are a smoker and smoke one cigarette in 10 minutes, then it means when you smoke 10 cigarettes [a day] you are wasting almost an hour-and-a-half of the company's time," Andrug said.

He said the company allowed only management to use cellphones and to take tea breaks but added it was unfortunate that the majority of senior employees were whites.

"Most of the senior employees are whites, that is something that we will have to address. We are definitely lacking in that department and have not given it enough attention," Andrug said.

Andrug said they were doing their best to ensure they adhered to safety regulations in the workplace.

He said there were three workers who died while working in the galvanising department. "It was an unfortunate incident, it was a mistake but it's part of history now," Andrug said. The incident happened in 2005. He said the employee who died in March last year died of natural causes. "He had a heart attack."