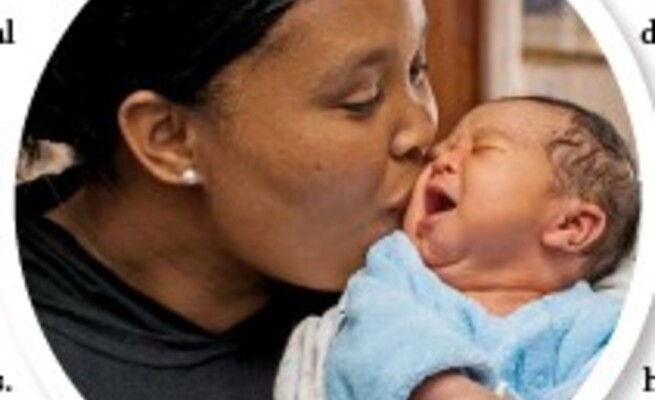 Jena Carolus’ wedding day started just like any other days, only that she felt more than just butterflies in her bulging tummy, she ignored the setting labour pains, and the couple ended up exchanging their vows in a hospital ward.

Jena (31) was nine months pregnant but doctors told her the baby she was having with her fiancé, Selwyn (35), wasn’t due for another week. She however, felt labour pains setting in just a few hours she’d be heading down the aisle.

The bride never told anyone about how she felt, and went ahead with the preparations for her great day. Little did she know the fate of her plans, just hours before the ceremony was due to happen at the Dutch Reformed Church of her hometown Vredenburg, on the Cape West Coast, but nature had other ideas, she couldn’t take it anymore.

“I burst into tears, the pain had become unbearable,” she said.

She begged her parents to take her to hospital. Her mom, Darlene ‘Dottie’ Andrews, tried persuade her to hang on for a bit – until she’d managed to say “I do” to Selwyn in front of the 100 wedding guests.

“My mom said I shouldn’t push. But I couldn’t resist it anymore – I was in terrible pain,” Jena recalled.

The pain got worse and Jena had to go to hospital. The couple’s fourth child – Gordanlee, a healthy baby boy weighing 2,9kg – was born just 30 minutes after his mom arrived at the hospital, and half an hour ahead of the wedding ceremony that was supposed to start at 3pm.

“Luckily, no one had arrived at the church yet,” Jena said. “I reckoned I probably wouldn’t be getting married that day, but my mom insisted we should go ahead.”

Vredenburg Provincial Hospital workers showed up and made arrangements for the couple to wed in their hospital room, with their parents and baby Gordanlee as witnesses.

“It was a miracle to have him there too,” Jena said. She was very happy that her wedding day is also her youngest child’s birthday.

Jena works as a domestic worker in Vredenburg. DRUM interviewed
Her at her place, and her good friend and maid of honour, Beuanette Slingers, was here too. Beuanette recalled how Jena paced up and down in the hair salon. “I could see she was in pain and stressed me because she couldn’t even sit still,” she said.

She’s grateful her friend got to marry Selwyn that day. “My dad brought my wedding gown [to hospital] and my hair was still just as it had been styled – I didn’t even sweat,” Jena chuckled.

The nurses did her makeup. “Though I felt happy that I’d still be getting married that day, I was in a lot of pain,” she explained.

Upon getting the news, some of the wedding guests made for the hospital but couldn’t attend the small ceremony.

The reception at Selwyn’s parents’ home went ahead– minus the bride and baby Gordanlee. “I was only discharged the next morning,” Jena said.

The reception was so emotional for Selwyn, Beuanette said.

“He cried a lot when he made his speech because his wife and new baby weren’t there. Many guests also found it strange to attend a wedding without a bride,” she said.

She felt lonely and sad without Jena, Selwyn later told DRUM over the phone. “It was a tough day. Everything happened so quickly in such a short time,” he said.

Flashback, he’s happy everything went out well.
“Gordanlee’s surprise arrival wasn’t the only drama on the wedding day. After the ceremony Dottie was also admitted to hospital.

“My mom has a heart condition and was experiencing chest pain. The same nurse who helped me give birth took my mom to the emergency unit for tests. The stress of the day was just too much for her. She was discharged that evening,” she said.

The couple’s love story began 14 years ago when Selwyn invited Jena to a party at his family home.

“I’d always had a crush on him, but I didn’t know if he felt the same about me,” she smiled.

He felt the same, and he proposed to her.

“He asked me to marry him during my first pregnancy, but I wasn’t ready,” Jena said.

“When I was pregnant with Abdul, I said, ‘I think it’s time to get married because there’ll be woes in your life if we’re living together and have kids but aren’t married,” she said.

In the turn of the year 2019, the couple began planning a wedding, but then they realised they were expecting another child.

“We didn’t want to tell anyone because we wanted to surprise our parents. We’d actually wanted Kelcy to be the last, but I was still happy when I found out I was pregnant again,” she added.

Jena was five months pregnant with Gordanlee when she told Dottie about her plans to wed. “My mom said she wanted us to get married before the baby was born. That’s why we set the date for 28 September – the doctor had told me the due date was 2 October,” she said.

For her, the little one was like a wedding gift from God, and she can’t wait to tell him the story of his birth one day.

“It feels as if he’s a wedding gift from God. What a blessing,” she added.