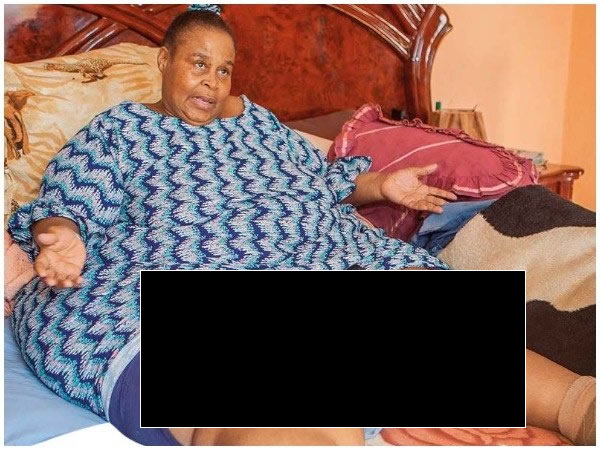 “We feel like a prisoners in our own houses” – mother and daughter who are stuck in their beds because of their weight.

Gogo Betty Shabangu is heartbroken, she last saw her daughter, Anna Tshabalala, many years ago and her hope is fading that she’ll ever see her child (Anna) again.
Painfully, it’s not that Anna lives somewhere very far away, nor is it because she doesn’t want to see her mother.
They both have strong desire to see each other.
So near, yet so far, Betty (69) and Anna (51) live only a few streets apart in Tsakane, east of Johannesburg, but they might as well be living in different worlds, making it very hard to see each other, despite the desire to do so.
Both women are stuck in their homes, made immobile by the genetics that have made them captives in their own bodies. 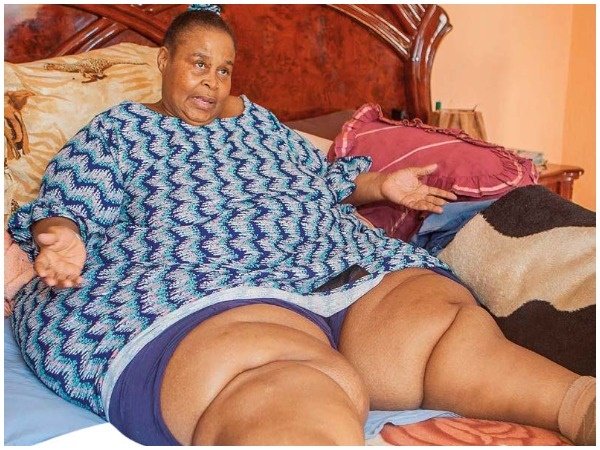 “I really miss my baby girl. I only see pictures on the phone because I am stuck in this house,” Betty told DRUM.
For nearly two decades, the gogo hasn’t been able to move around on her own. Her weight and leg injuries has rendered her bedridden, she can’t even leave her house. Of late, she doesn’t know how much she weighs but the last time she was weighed, “a few years ago”, she was “around the 400kg mark”, Betty told the magazine.
The battle to shed weight has been a big part of both of their lives for many years. Betty has been following a low-carb eating programme since last October and, although she’s been unable to weigh herself, she believes it’s helping.
“I’ve cut fat, carbs and starch. I eat only veggies, fruit and boiled meat,” she said.
Across the road, Anna’s weight, compounded by the after-effects of surviving two car crashes, have trapped her in her bedroom too.
She does not even know what she weighs either, her scale only carries the maximum load of 180kg, she looks bigger than her mom and, like Betty, she’s also desperate to get out of her house.
“I’m trying everything, from injections to the banting diet, but the skin between my legs is hardening,” she said, with tears running down her face.
One night in 2001, Betty heard a cracking noise when she stood up from her couch to go to bed, that was the day that changed her life up to now.
“I was watching TV in the lounge and when I stood up to go to the bedroom, I heard the sound of something breaking. I fell back on the sofa. Suddenly I couldn’t move my legs,” she told the publication.
Her late husband William who was also in the lounge with her, did not take her seriously at first, he thought she was just kidding but soon realised his wife really couldn’t stand up. The pain in her legs was “excruciating”, she recalled, and William took her to hospital, the beginning of many trips to the emergency room.
In her first visit, the doctors failed to understand what had caused her to collapse, they simply prescribed painkillers and she was given a pair of crutches.
After things worsened she went to a different hospital, where doctors were again unable to diagnose what was wrong.
A gruelling six months later doctors at the Clinix Botshelong Empilweni Hospital in Vosloorus discovered Betty had broken both her legs.
“When my left leg broke my entire weight was transferred to my right side causing my right leg to break as well,” Betty said.
She was transferred to Life The Glynnwood hospital in Benoni for knee replacement surgery but after the operation she still couldn’t walk.
“I went for physiotherapy but I quit because it wasn’t working. I was also scared my legs were going to break again,” Betty added.
Her granddaughter, Thando (20), is now taking care of her gogo. She was six years old when she moved in with Betty and now she keeps the house clean and prepares meals every day.
Thando finished school last year and hopes to study nursing.
Betty said obesity runs in their family, her grandmother, Elizabeth Mabena, was housebound for 12 years before she died at age 103 in 1996.
“Her heart was strong but her bones couldn’t carry her body,” Betty said.
Meanwhile, Anna’s ordeal started a few months before her mom broke her legs, she survived a car crash on her way home from work with her husband, Mandla Tshabalala, who died in 2017 at age 55.
“I was in pain for a long time but I didn’t know where I was injured,” she said.
She said it took Pholosong Hospital in Tsakane seven years to give her a diagnosis, and she had hip replacement surgery on her left side in 2007.
“I was not as flexible as I had been before but life was back to normal. I was able to walk and drive myself to work,” she told the magazine.

Before long, she began having difficulties in walking again and doctors said her right hip needed to be replaced too.
As if under a bad spell, 10 years later, she was involved in another accident, when an armoured truck crashed into her parked car at a shopping mall.
“The vehicle knocked my car and dragged it with me inside.”
“I went to Tambo Memorial Hospital. I had fractured my right hip, which caused the replacement to shift,” she said.
The doctors couldn’t operate her because she was too heavy and needed to lose weight.
“I cry every day looking at what my life has become. I have to sit like this every day staring at this mirror,” she said, pointing to the dressing table opposite her bed.
“Through this mirror I see my life becoming useless every day. I want to get up and go but I can’t,” she said.
Anna used to work at a laundromat in Boksburg as a tailor and should be eligible for compensation from the Road Accident Fund (RAF).
When DRUM contacted the RAF to ask why she has not been able to get an RAF certificate, RAF acting chief marketing officer Adriaan Taljaard said the RAF had considered the fault element and is satisfied with that aspect of the claim but it is still in the process of considering its liability before dealing with the quantum of the claim (the total amount paid out by the RAF based on assessment of the claim).
That’s less consolation for Anna. She believes her life, has become a curse – for her and for others. “I have to call my family to come lock me inside because I am scared. They come and open during the day. I feel like a prisoner in my own house,” she said.
When DRUM visited Anna, her sister, Lydia Mahlangu (53) was there. “I come here to help her and my mother but I also have a house in Mpumalanga and I have to go back,” Lydia told the magazine.
She added that the family had been looking for a helper but no one showed interest to work for free.
When Anna needs to go to hospital, three ambulances and a fire truck have to come to her tiny house to help her.
“I think the paramedics will soon refuse to come here because it’s a mission to even get the stretcher out. I feel like I am a burden to everyone,” said Anna.
Anna is desperate to lose weight. Like her mom, she is following a low-carb diet and a dietician regularly administers apetite-suppressant injections.
“I pay R800 a month for the injections. I had to change my diet to veggies and no starch. If I can get rid of this extra fat I think they’d be able to fix the hip replacement,” she explained.
With tears streaming down her cheeks, she added: “I am always depressed. I’m too young to be living like this.”