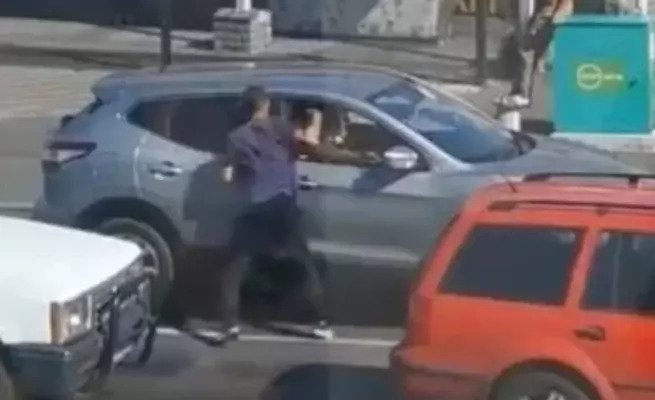 A video of a motorist being robbed in traffic has surfaced on social media.

In video number one shared by South African anti-crime activist Yusuf Abramjee, a Nissan Qashqai can be seen stuck in traffic with the driver’s side open.

Out of the blue, a man wearing blue trousers and a t-shirt grabs what might be the motorists’ phone and disappears into a shopping complex.

Following that, the motorist tries to chase him but is unable to catch him.

In video number two, moments later the same man who grabbed the phone and ran – reappears and runs towards a Toyota quantum that was parked in front of the Qashqai.

The driver angrily reversed and made a U-turn and left. The City of Cape Town's Mayoral member for Safety and Security Jean-Pierre Smith said they deployed undercover cops to the area and hunted the thief down

"Many people will have seen this video of a motorist being robbed at the intersection of Halt and Voortrekker Road, after which the suspect gets into a taxi and leaves.

“After the video was submitted to our public emergency communications Centre by me and then onto law enforcement the plainclothes unit within law enforcement followed and managed to find the suspect and arrest him along with other persons of interest," said Smith.

He advised the man to go and open a case against the thief. Smith said they couldn't track the victim down as the registration number wasn't visible.

“Unfortunately the vehicle registration number of the victim is not visible and we are asking for anybody who knows this person to ask him to please come forward so that we can ask him to lay a formal charge. He should immediately lay a charge with the South African Police," said Smith.

Video 2: And how the criminal escapes… pic.twitter.com/OA8wVSNt8v

“Residents have applauded the law enforcement for their quick response."

“That area is dangerous because people get robbed of their phones even when they are in a taxi. “Thumbs up for the municipal cops for their reaction because many people have lost their phones and handbags in that area," said Munashe Manto who works in the area.