Sometimes life can be so cruel, it happens sometimes that when you want to do good, things go amiss, that was the case with a perfect dad who shot and killed his lovely little daughter. Shailendra Sukhraj, the loving father from Chatsworth, Durban, shot and killed his little girl while the family car was being hijacked, last year, now he has to live with the pain.

In this case, he was a man who had tried to protect his family, tried to stop the robbers from driving away with his daughter, but it all went terribly wrong.

Shailendra and his wife, Lorraine, were speaking for the first time of the pain their family has gone through. The ordeal reared its head again into the public fore following the recent conviction of one of the hijackers.
Sibonelo Mkhize (39) was put behind bars for the rest of his life for aggravated robbery and for the murders of nine-year-old Sadia and Mkzhize’s partner in the robbery, Siyabonga Bulose.

Even though it was Shailendra who fired the bullet, Judge Esther Steyn found Mkhize guilty as his actions had led to the two deaths. Under laws of common purpose, an accused can be held responsible for crimes they did not commit if, by their conduct, they must have foreseen the crimes could be committed. 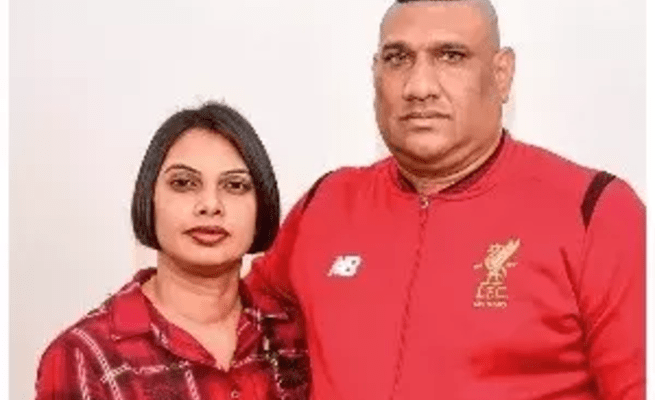 “Ordinary citizens should not go through what Mr and Mrs Sukhraj went through on an ordinary day while taking their daughter to school,” the judge said.
The added that the family had been robbed of their beautiful young child. Be that as it may, as for Shailendra and Lorraine, the fact the man responsible has been jailed for life is still brings less comfort, because their daughter is gone for good.
“Whatever you could want in a child, she was all of it,” Shailendra said. “She was a people person, even at that age. She was extraordinary.”
For the Sukhraj family, Monday 28 May 2018 started like any other day, they woke up, get dressed, had breakfast, and set off to drop off the kids, before heading for work. Shailendra (41), a sales rep and pastor, and Lorraine (39), a doctor’s receptionist, put Sadia and her baby brother, Jaziel (then six months), into the family’s Hyundai Tucson.

They headed for Lorraine’s mom’s house in nearby Shallcross to drop off Jaziel, who was baby-sat by his granny while his parents were at work.

“We got into the driveway, switched off the car and exited it. As my wife went into my mother-inlaw’s house with Jaziel, I started to get whatever was needed for the baby from the car and went inside,” Shailendra recalled. Sadia remained seated in the backseat of the car as usual, while her mom and dad got her little brother settled. About three minutes later, Lorraine went outside to their car and Shailendra heard her scream, “Oh my God! There’s somebody in the driveway!” Shailendra rushed outside, one of the two hijackers demanded the car keys from him at gun point. He surrendered the keys and withdrew towards the house.

“Sadia was still in the car. I had to submit to the request because my life and my family’s lives were under threat. From the moment I handed over the keys and went back in the house, I knew this spelt trouble,” he said.
Back inside, the house Shailendra pulled out his firearm, since he was a travelling salesman he often had a gun on him as he often drove through dangerous areas. Moments later, he came out armed and ready to do whatever it takes to stop the hijackers from driving away with Sadia.

“I could see her. My mind was focused on her as they were driving off and I knew I needed to stop the vehicle,” he said.
Rape. Human trafficking, were his thoughts as he shot at the car, desperately trying to save his lovely daughter.
“I wanted to stop the car. Instinct kicks in at the spur of the moment. It’s very easy when you’re not in the situation [to criticise my decision] but when you’re in the moment it’s extremely difficult,” he added.
He fired at the driver but the car kept going until it crashed into the gate, then into a parked car in the road. When the car struck the gate, the rear passenger door to swung open because of the impact. That was the last time Shailendra saw Sadia alive.
“As a father you just want your child back . . . but it never happened,” he said.
Sadia was struck in the chest by one of the bullets from her father’s gun. She was rushed to hospital but it was too late to save her.
Bulose died of gunshot wounds too and Mkhize was arrested near the scene by an off-duty policeman, Warrant Officer Hemant Raghoonundan.
Shailendra and Lorraine are still trying to pick up the broken pieces of their lives. It is hard, but they are getting emotional support from spiritual and professional counsellors, friends and relatives as well as their community.

They also bank on each other’s shoulder, Shailendra said the tragedy, has made their marriage stronger.
“My wife has her bad days and I have my bad days. We look to each other for support and that has really strengthened our marriage.
“After what has happened there’s a sense of guilt, of course there is. It’s not something we could take an eraser to and remove from our thtraged,” he said.
Lorraine gets solace from the cheerful moments the shared alongside their little girl would fill the house with song and dance every day.
“She was full of life, bubbly and a real gem. She was beautiful inside and out, in every aspect of the word,” said Lorraine.
Sadia who would’ve turned 10 this year is sadly missed, and her parents now have drifted their love towards Jaziel (now 1), their faith, the community and each other.

Everything aside, the couple harbours no bad feelings towards Mkhize.

“In court he didn’t show a stitch of remorse,” Shailendra said; “but I’ve let it go. It’s crystal clear in the Bible that if I have any inequity in my heart, the Lord will not hear me so I have released that.”

“I feel the same way,” Lorraine said, “because at the end of the day it’s not going to bring my child back.”
Shailendra believes their beloved Sadia’s brief life was a meaningful one.

“If you look at the lives she touched, yes, she’s served her purpose. She’s touched so many lives in her way it’s unbelievable.
“The most important thing is love, and love conquers all. Sadia had love,” he said.