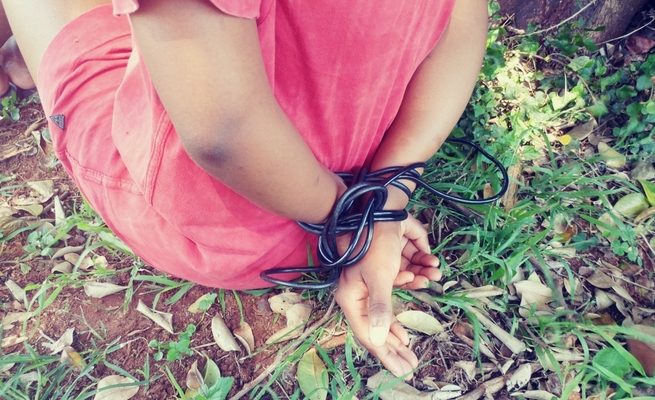 I don’t see myself ever getting married again. This experience has scarred me for life'

Marriage, just like love is an agreement between people to live together as husband and wife, usually this is followed by the necessary modalities, rituals, wedding ceremonies and the likes, but it is never a forced thing.

However, that was not the case with Amanda Ndyebo* who, was dragged kicking and screaming to her ‘wedding’ against her will. The Eastern Cape woman was only 15 when she was abducted and forced into a marriage to a man almost double her age.

This was part of a primitive and outdated practice, ukuthwala, in the rural areas where young girls are married off to older men against their will, with only the approval of their families.

Be that as it may, after eight years of marriage Amanda, now 24, managed to free herself and ran away from her husband with her two children.

Their marriage and separation came to the spotlight after her husband demanded his lobola money back from her family. “It’s a trauma I am still working on getting over it,” the former child bride told Move magazine.

The day that changed the course of her life started like any other normal day, after doing her routine chores. She and her brother were on their way to buy tobacco for their father in another village in Ngcobo in the Eastern Cape when three men approached them and started pulling and dragging her.

The 15-year-old was overpowered, confused, and begged to be let go, but to no avail. Kicking and screaming she finally arrived at the house which was set to be her home for the next few years.

“They wanted to dress me in traditional makoti wear, but I refused and said I wanted to go home. The more I resisted, the more adamant they became until somebody told me that they had asked my parents for my hand in marriage and they had agreed. I gave in. I was powerless,” she recalled.

She had no choice, other than to give in to her new life, becoming a wife to a man she had never met before.
Amanda was still a virgin when she was married off to her 28-year-old husband against her consent and unprepared.

After getting married the husband left for work in another province where he would return after three months, leaving her with his parents and sister.

She was in Grade 9 when she was abducted her in-laws promised her she would still be in school to finish off her studies, but they were not sincere.

“I wanted to study and become a police officer. However, even though they said I could go to school they
seemed to hate the idea. I would go to school and when I returned there would be a mountain of household chores waiting for me.

“I ended up dropping out before finishing Grade 9. Even when I was pregnant, my mother-in-law wouldn’t let me rest saying I was not the first woman to be pregnant. She said working hard would do no harm. When I miscarried, she said it was because I was previously on contraceptives,” she said.

She had to stay in her forced and loveless marriage for eight years because her father would not allow her back home.

“In the early stages of the marriage I started liking the husband, but I don’t think I ever loved him. I never imagined my future with him. In fact, I would be with him and all I could think about was being with my family.

“When there were troubles in the marriage and I went home, my father wouldn’t allow me to stay. He would shout at me and tell me, “‘Umfazi uyanyamezela emzini (A wife must endure all things in her marriage),’” she said.

She stayed with her husband even though it became harder and harder every year.

“The husband changed when I had a child. He didn’t treat me like someone he loved. He didn’t even want to give me money for the children. He said I should use the child grant. When I said that wasn’t enough, he said I should make do. When I fell short financially, I had to ask my brothers to assist me. When there were traditional ceremonies at the house, I had to borrow clothes from my mother,” she narrated.

Following her father’s death in 2018, she gathered the courage to leave the marriage. Her mother who had been giving her money throughout her marriage, couldn’t afford to do so, after her father died.

Her mother never forced her to go back either. Amanda, a mother of two children aged five and three, said her experience has made her hate marriage.

“I was robbed of my youth and for what? I wasn’t happy. I look at girls who want to get married and I wish I could warn them that it’s not as nice as it seems but it is not my place. They must experience it for themselves.

“I don’t see myself ever getting married again. This experience has scarred me for life. In the beginning things seem to be okay but the longer you stay, you see it for what it truly is: oppression,” she said.

If she had power over her daughter's life and choices, she wouldn’t allow her five-year-old daughter to ever marry.

Her marriage could be over, but the storm isn’t yet, the husband has demanded his lobola back, a subject currently under discussion between the two families.

Dr Nokuzola Mndende of the Commission for the Promotion and Protection of the Rights of Cultural, Religious and Linguistic Communities said they condemn the practice and his sudden request for his lobola back.

“We see this as abuse of women as well as culture. She was a child when they abducted her, making it statutory rape because she was underage.

“There are many things wrong with this situation, including the fact she was not treated well as a young bride. It is anti-African culture to mistreat umakoti. You should treat her as your own child, that’s why she gets given a name, as a way of welcoming her. Mistreating her is contradictory to our culture. It is also very wrong for him to demand his lobola back because she even had children in the marriage,” she said.

However, Professor Digby Koyana, a cultural law expert, said there was nothing wrong with the husband demanding his lobola back. “That husband has every right to want his lobola back, he is entitled to it,” he said.

Even though Amanda and her husband no longer have a relationship, he phones her mother or other elders to ask for his children to be brought over. “I’m uncomfortable with that arrangement because I don’t know if one day when we fetch the kids, they will not allow me to. If I had my way, I wouldn’t allow them to go to him, I’m afraid of the elders,” said Amanda.

*Not her real name.