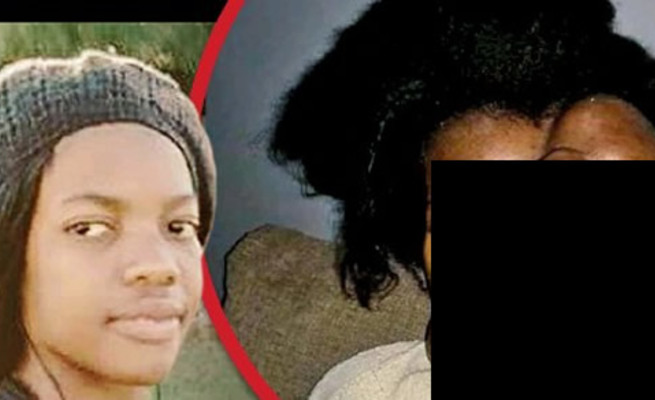 Life has never been the same again for Ntomboxolo Maqubela after a tumour, though not cancerous, ravaged her face, it ruined her life.
Besides the pain caused by the tumour, Ntomboxolo finds herself in a hell as strangers point and make fun of her. Her once beautiful face is almost completely obscured by an enormous tumour that has robbed her of a normal life.

Despite a thread of surgeries the growth refused to go away, denting all her hopes of a career, owning a home, a car, and starting a family.

An electrical engineer by profession has lost her sight in one eye and her speech is now almost inaudible, let alone having a normal meal. She is no longer able to take in, solid food as part of her mouth has been lost to the tumour.

Her diet has been reduced to liquids, porridge, soups, and other soft mushy meals.

Ntomboxolo (31) is fast losing the hope battle of ever living a normal life again.

After years of a hellish living because of the growth, she is still to come to terms with what seems to be her fate. “I don’t know if it will grow bigger. I just want this tumour off my face,” she told DRUM magazine. 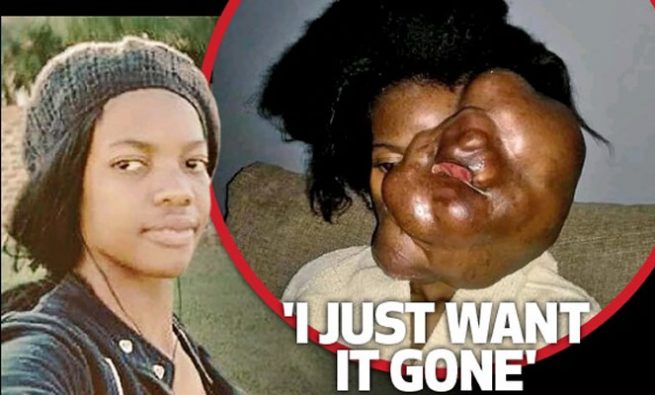 The giant tumour, began like a simple sinus cavity near her nose, since then, Ntomboxolo has already underwent multiple surgical operations over the past decade to have the tumour removed but each time it returned, even bigger.

Painfully, it all started with what seemed to be a harmless sinus infection in March 2008, when she was a second-year electrical engineering student at the Cape Peninsula University of Technology in Cape Town.

She now spends most of her days indoors, in her bedroom, away from the eyes of the cruel strangers who make fun of her. “Sometimes my family will take me out to a movie but because of the way people react when they see me, I no longer go out,” she said.

She now lives in East London, with her aunt, Thami, and uncle, Luvuyo Maqubela. DRUM spoke to her via a video call, but it was cut short because her speech was inaudible, and they resorted to WhatsApp messages.

At first, Ntomboxolo thought she just had a cold or flu when she had a fever, blocked nose and had difficulty breathing.

Meanwhile, she appeared to have recovered after she bought a decongestant at a pharmacy, but later that year the symptoms returned, and this time it was much, much worse.

“My left eye started to pop out. I went to the clinic on campus and a nurse examined me and referred me to a day hospital,” she recalled.

The doctor at the day hospital, told her that it was the first time he’d been confronted with a condition like hers and he referred her to the Head and Neck Oncology Clinic at Groote Schuur Hospital.

The doctors carried out a scan on her face and told her they suspected she might have a cancerous tumour that was growing, but they could not establish the cause. They sent her back home and asked her to return within three months.

During the course of that time, her left eye became increasingly swollen and began popping out of its socket. She also noticed a growth, which looked like raw meat developing on the left side of her nose.

She went back to Groote Schuur and doctors confirmed that a tumour was indeed growing in her nose.

“But they didn’t know what was causing it. They decided to operate to avoid complications,” she said.

Surgeons successfully removed the tumour, which happened to be only a tiny lump, and her life seemed to have returned to normal.
But 2010 her eye began to swell again and this time the swelling moved to her nose too. She went under the knife once more to have the tumour removed but after a few months it was back again.

Five years later the tumour had eaten into the left side of her jaw. The doctors suggested removing her left eye and performing a skin graft on her face, using skin from her leg to improve her appearance after the surgery. But Ntomboxolo was not ready for that surgery.

“I told them I couldn’t agree to something like that. I decided it would be better to go home and die because it felt like the tumour was already killing me,” she said.

Since then she hasn’t undergone any surgery, and the tumour has continued to grow.

Ntomboxolo graduated from a local university in 2013 with her national diploma in electrical engineering, an accomplishment that took a lot of courage and determination.

“I couldn’t cope,” she said of her studies. “I was failing because I wasn’t attending classes most of the time as I was always in hospital. But I pushed on.”

In August this year she moved to East London to live with her aunt and uncle. Thami is a social worker and Luvuyo works at Buffalo City College. They now care for her, but Ntomboxolo said life in the big city was easier.

“In Cape Town I was free. It’s like people understood my pain. In the Eastern Cape most people laugh at me and tell me I’m ugly. I have a lot of pain and bleeding. I bleed from my nose and mouth for four days at a time. Sometimes the whole day,” she said.

After a check-up last year, doctors said her the tumour had spread to parts of her skull which makes it very risky to operate her as it could damage vital structures.

However, Ntomboxolo recently visited a specialist in Johannesburg who told her the tumour is operable. In the meantime, she’s found a natural alternative to treat the pain – cannabis oil. It helps, but it’s expensive.

A friend gave her the idea to try it, and after some online research she found medical scientist Dr Shiksha Gallow, the head researcher at Cannabis Oil Research, which is based in KwaZulu-Natal.

Ntomboxolo can’t afford the full treatment. “I noticed the vials help with the symptoms and thought if I could use the full protocol at once, maybe the swelling will go down,” she said.

With the help of friends, she is campaigning on social media to raise money for the treatment.

“I’ve made peace with the fact my face will never be normal again, but I just want this tumour gone,” she said.

A politician helped Ntomboxolo get a consultation with a specialist in Johannesburg, paid for flights, accommodation, the consultation fee and the scan. She is awaiting the results of the assessment.