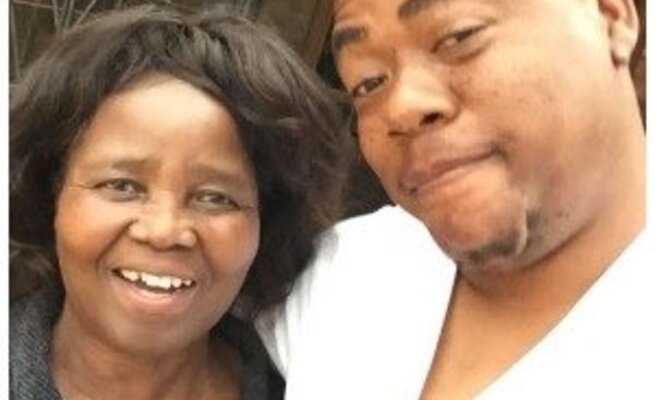 Sithembiso Ndashe (36) owns a food company, Ndash Food Pop Up, that specializes in traditional African food, he has became a centre of attraction, not because of his business acumen or prowess, but because of how he treats his mother.
He recently posted a video on Twitter that featured his 67-year-old mother, Winnie Ndashe’s reaction after receiving a notification that he had sent her some money, the video won hearts and went viral.

In the video, Sithembiso noticed that his mother is in low spirits as he was driving with her. He decided to send her some money – smart man!
When Winnie received the notification, that she had been sent some money by her son, her face lightened up! She turned to her son, blew him a kiss and thanked him.

He captioned the video, “This Morning while driving with my mom, I see she looks sad, so I sent her that notification that brings a smile and boy she was happy #Mamasboi #MondayMotivation.”

Speaking to DRUM, Sithembiso said his relationship with both his parents has always been great and they’ve always been close. “So, when my dad died, I stepped in. On my mother’s birthday, I do the things my dad used to do for her. Even on Valentine’s Day, I call her and buy her flowers. She’s my friend and I always want to make her proud and happy, like any son. Even with my business, she’s my biggest inspiration.

This Morning while driving with my mom, i see she looks sad 😔 so i sent her that Notification that brings a Smile 💰 💳 💵 and Boy she was happy 😊 #Mamasboi #MondayMotivation pic.twitter.com/bt32g4Vvu2

“In the video, I sent her money because it’s what I usually do. I like doing nice things for her, when I see a nice pair of shoes for her, I buy them, for example. And if I have the money, I send her some, it’s the kind of relationship we have,” he told the magazine.

Winnie is also set to go on a trip with her friends soon, so her son gave her a little extra cash to make sure she has fun. “My mom’s a pensioner, I don’t want her worrying,” he said.

Asked, how much did he send her exactly?
He answered; “I’d rather keep that private.”

He’s not only a businessman but Sithembiso also runs a campaign called I Love Fatherhood.

“The campaign is about showing men just how much women do daily when it comes to raising children. It’s not just the big things but the changing of diapers, not getting enough sleep, playing with them when you’re tired, feeding them and the list goes on . . . it’s a lot.

“And what I’m saying is that it’s not just the responsibility of your child’s mother to make sure all those things are done,” he said passionately.

He went on; “My daughter is now seven years old. When she was born, I decided to be there every step of the way. Her mother and I are no longer together but we have a friendship that works for our child, and that’s who matters the most – the child.”

Sithembiso told DRUM he gets phone calls from fathers most of the time, asking for advice on how to deal with certain challenges they face when it comes to fatherhood.

“I give them the best advice I can based on my own experiences. But where I can’t help, I bring in experts such as lawyers and psychologists to assist them and give them tips that will help them become better fathers.”

His relationship with his parents should be credited for how passionate he is about being a good father to his daughter.