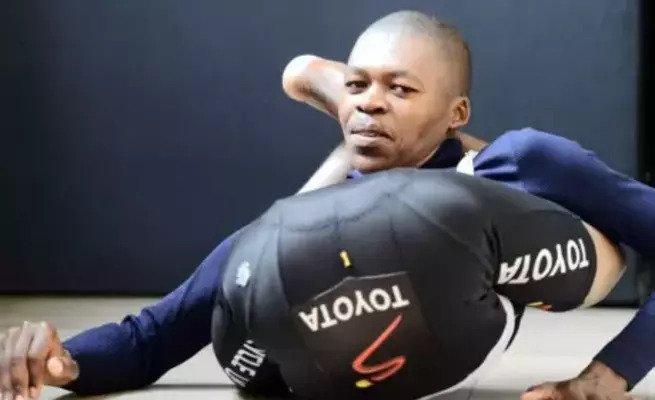 Justin Phahlane is a contortionist, flexes his body as if made of rubber, he learnt how to tie himself in knots from a TV show – now he is an expert and wants to teach township kids his unique skill.
Contortionism is an act of physical performance which involves dramatic bending, flexing and twisting of the human body – and it’s the 31-year-old’s passion.

Justin, who is also affectionately known as The Rubberman, told DRUM that it all began as a pastime, at a young age, after he saw contortionists of The Great Moscow Circus performing on TV.

“I was amazed by how the performers could bend their bodies in ways I had never seen before. I began to imitate the moves in my own time, trying to master the poses I’d see in the shows,” Justin said.

After years of training and trials, he is now reaping the fruits of his childhood passion, has now taken it fulltime, performing on TV shows in Mzansi, as well as in front of Zambian president Edgar Lungu recently. 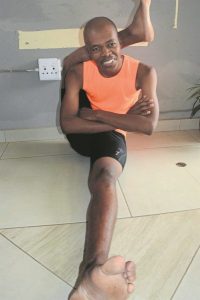 This has pushed him to introduce contortionism in his rural community in Pieterskraal, Mpumalanga, by forming a community-based team of contortionists, called The Rubber Team, whose members are aged between 12 and 32 year olds.

While he enjoys what he does, he admitted that making a living from it has not been easy.

“We aren’t a country that regards contortionism as a sport, so that means there are no government development centres or competitions for it.

“The other constraints of being in a niche market are the cost implications for the equipment one needs,” he said.

He explained:
“The team that I’ve started have to practise in my garage.

“What keeps me motivated is knowing I’m doing something I’m passionate about. The results will come.”

On his greatest feat so far: “Performing in front of Zambia’s president last year was by far the greatest performance I have had,” he said.

He was billed to perform in Botswana recently, but the show had to be deferred because of the recent xenophobic violence in South Africa.

“You don’t need to be double-jointed to be a contortionist, but it does require a great deal of stretching, and lots and lots of practice,” he said.

Justin had his debut performance in front of an audience when he
was 13 years old, at a talent show at his school.

“Some people called it magic,” he recalled with a laugh.

The crowd encouraged him, while his own feeling of accomplishment drove him on, despite the fact that his family wanted him to concentrate on his schoolwork.

At one time he shelved his contortionism to become a traditional healer. “It’s something that runs in the family,” he told CliffCentral.com a few years ago.

“It’s something I inherited from my mom. I worked with her for a couple of years, she showed me how to heal people . . . it’s a very useful skill to have,” he said.

Now he is back to his passion, and skill.

“I followed The Great Moscow Circus to learn routines,” he shared.

Through internet research, he learnt the importance of warming up and stretching to prevent injuries.

‘What if you break your bones?’ That was the first thing my family asked me when I told them this is what I wanted to do after high school,” he said.

“It was a valid question, but as a performer I know what I am capable of.

“I try not to push myself too much. When I feel like I’m about to hurt myself, I stop,” Justin added.

He has been doing this for the past 18 years and believes that with training and exercise anyone can do it.

Justin admitted that the market for his brand of performance isn’t huge in South Africa. “Not a lot of people know about contortion and the greater market remains overseas,” he said.

Despite lack of market he is not thinking of leaving the country. “I believe one can be profitable anywhere. I treat what I do as a sport and it is up to you to decide how you use what you earn, and the responsibility falls on you to be versatile,” said Justin.

“As long as I’m in South Africa I can work anywhere. Making it in SA is the goal and so is building a brand abroad,” he added.