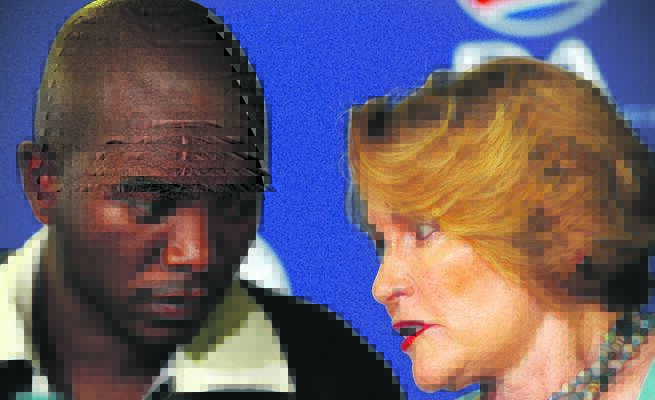 As pressure mounts for him to be removed as leader and opposing camps gear up for a divisive and damaging clash, Maimane warns attempts to turn the DA into a ‘narrow, minority party’ would be dangerous for the country

Former DA leader Helen Zille’s announcement that she would be contesting the position held by outgoing federal chairperson James Selfe – hours before the close of nominations – set the cat among the pigeons in the party’s ranks on Friday.

Party leader Mmusi Maimane’s supporters were left reeling after the shock announcement, which places Maimane’s favourite for that role – federal executive chairperson Athol Trollip – on the back foot.

History will be repeating itself as the two senior leaders have previously faced off for the position of parliamentary leader, which saw Zille come out on top.

Zille’s return also signals the regrouping of the wounded and disgruntled under the leadership of Maimane, who succeeded Zille with her blessing in 2015.
Apart from the election of Selfe’s successor, other key matters that will take centre stage at the party’s federal council on October 18 include the report from the review panel and the inevitable discussion of an early conference.

Zille told City Press’ sister publication Rapport on Saturday that she no longer believed – as she did in 2015 – that the race of the leader of the party mattered.

“Under Jacob Zuma, we were in a race to rescue South Africa. In the run-up to the 2016 local government elections, I realised we had to break out of the Western Cape. I really believe I took the party as far as I could. Leaders really do have a shelf life. And I thought, knowing the kind of person Mmusi was, that he had the charisma and the dynamism to take us to the next level. And that’s precisely what happened in 2016,” she said.

She also confirmed that, after the May 8 polls, several senior leaders approached her about forming a breakaway party, but she declined, arguing that it was better to “revive the DA”.

The former Western Cape premier also insisted that she had no ambitions to take over the top job and pledged her support to Maimane should she be elected.

Read: Maimane: ‘I have nothing to hide, they are running a campaign to discredit me’

When asked if she had faith in Maimane’s leadership, Zille said: “I have faith that we can fix the party internally and the first step is for the leadership to gel so that the party can start growing again. The role of the council chairperson is not to change leadership. The only structure that can get rid of a leader is the federal congress, or if the leader resigns.”

Meanwhile, in a separate interview with Rapport, Maimane conceded that his relationship with Zille had become strained.

“We have had a difficult relationship in the past. But, for us, the focus is on the future. Let the delegates decide on the future of the DA,” Maimane said.

“The position is a very important one in the DA and the congress. It’s not a personal issue for me, it’s more important for the DA. Whether I stay or not, it will be important for the DA to focus on the future. If we want to make the DA a narrow, minority party, that would be dangerous to South Africa’s goals.”

DA leader in KwaZulu-Natal Zwakele Mncwango told City Press that, while there was time to be convinced otherwise, his vote for Selfe’s successor would be going to Trollip.

“We need someone who can really hold the centre. In my personal assessment, I believe that Athol will hold the centre. We need unity in the organisation – the infighting doesn’t help anyone. Athol and Thomas have not deviated from the 2018 values that were adopted, and that is the most important thing for me that makes them, in my view, the two to be considered,” Mncwango said.

He added that he was “surprised” by Zille’s decision to stand, but that there was nothing prohibiting her from doing so and that she remained a senior leader in the organisation.

Another provincial leader told City Press that they felt that Zille’s comeback was unnecessary.

“Honestly, what she is doing is dictatorship of a special kind. It is as if she is convinced that the party cannot succeed without her. She believes that she made [former DA parliamentary leader] Lindiwe [Mazibuko] and Mmusi, and that things won’t move without her. She has really overstated her importance.”

The leader added that they believed Zille had made a grave miscalculation in believing that she would return to the same party that she left in 2015.

“Things are different now – she has her supporters, but they are in the minority. Most of us have bought into Mmusi’s vision of an inclusive South Africa, and we won’t just lie down and let that work be thrown away.”

Apart from the election of Selfe’s successor, other key matters that will take centre stage at the party’s federal council on October 18 include the report from the review panel and the inevitable discussion of an early conference.

The panel, which is headed by the party’s former chief strategist, Ryan Coetzee, also included former party leader Tony Leon and founder of Capitec Bank, Michiel le Roux, and will be making its findings known to the highest decision-making body between congresses.

The panel was mandated to do a nationwide consultation on the party and its structures following its dismal performance at this year’s elections, where the party shed about 400 000 votes.

City Press has learnt that among the proposals made to the panel were radical reforms to structures in the party, including the composition of the top brass.

On the policy side, the sticking point will be around race being used as a proxy in the party’s alternative to the broad-based BEE system, a discussion that has bitterly divided senior leaders and spilt out into the public arena.

Mncwango told City Press that he did not want to pre-empt the outcomes of the panel, but insisted that it would be crucial for the party to continue to recognise that those who were historically disadvantaged were black.

“If we agree that there is a painful past and we need a future for all of us, you can’t ignore the past and how the majority – who are black – were treated. If we ignore that the majority of South Africans are landless and locked out of the mainstream economy, then we will all – across all races – be in trouble. We can’t allow the majority to be frustrated, it is a risk to peace in the country. No review can take us forward if it seeks to ignore the imbalance of the past,” the provincial leader said.

On the likely resuscitation of the calls for an early congress, Mncwango said that he did not feel it was necessary.

“If we agree that we need to change the constitution, then, yes, we can talk about an early congress. However, changing leadership is not a change in terms of policy direction. The leader leads based on policy agreed on by the 2018 congress. There are many people who contributed to us not doing well in this year’s elections. Changing one person won’t change everything.”

He also warned against setting an ANC-like precedent, where leaders do not finish their terms, and creating a culture that could not be reversed.

Maimane’s position got shaky when he took Zille on regarding her colonialism tweets.

Divisions became even more entrenched in the party over the handling of former Cape Town mayor Patricia de Lille’s exit from the party, the fallout over the wording of the redress policy and, finally, the electoral failure.

While some in the party had begun talking about ousting Maimane soon after this year’s elections, that plan was foiled by the failure to find a candidate to contest the party leader.

The fresh bid to oust him could result in an early congress taking place next year, where he would most likely seek re-election.

Names that have been bandied about to contest him include Trollip, chief whip John Steenhuisen and Johannesburg Mayor Herman Mashaba.

Maimane also told Rapport that it was incorrect to say that he was fighting for his survival.

“People say I’m fighting for my career. I’m more focused on political direction. And I will serve that purpose and direction. Whether I’m inside or outside the DA, that remains my mission. It’s not that I’m worried [because] I’m trying to hold on to a job, I am worried because there is a vision here that is seriously under threat,” he said.

“DA members can see we’re driven by the future. So stories are being made up by newspapers, but I’m not worried about that. They made false accusations against me. And I placed the facts before the organisation. I am not going to be prosecuted by newspapers. I am accountable and subjected myself to an investigation by the DA.”