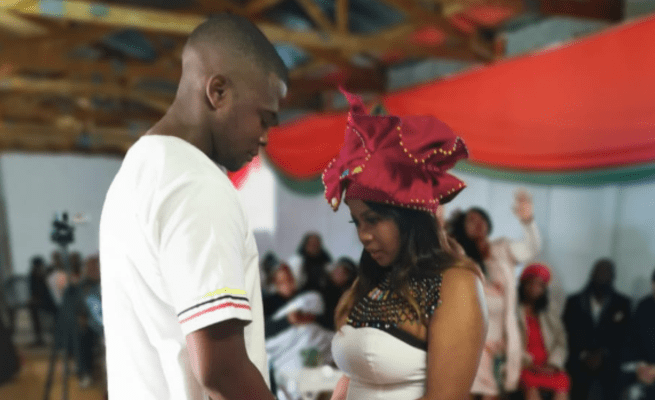 The 25-year-old married South African couple has spoken to DRUM magazine about the reason behind their lean R6000 wedding, saving much for later, honeymoon.

The couple from Port Elizabeth, Wongalethu and Honey Vakala said they have noted that many people plan extravagant weddings just to impress people, only for them to settle for less on honeymoon.

“We took the wedding money, deposited our first car and booked a honeymoon overseas. We disappointed a lot of people, we had doubts as well but looking back now, we made the best decision for us we are enjoying our honeymoon in Thailand,” said the groom, Wongalethu.

He went on; “I’ve been having issues with my family they didn’t approve of me getting married because they felt that I am still young and have just started working. I paid lobola in May this year to show them that I was really serious about my decision.

“Initially my wife and I wanted to have a big wedding but after we got scammed R10 000 with a dealership that is based in Kimberley – it tore us apart because we lost the money and we had to start saving up all over again. We got kicked out of a place we were renting in Cape Town, we were broke. A friend of ours in Long street offered to tailor make our wedding attire which was such a blessing.”

Wongalethu told DRUM that they at one time feared disappointing a lot of people whom they would not invite to the wedding, because of the decision to have a lean budget for it.

“My wife and I were hurt that we couldn’t invite our pastors who were with us during marital counselling, relatives, colleagues and close friends.

“My family had big plans, my mom invited all of her friends, colleagues and some of the community members and even booked the wedding venue.  I had to stand up for my wife and show her that the man she is marrying has a backbone. I cancelled all the plans my mother had for my wedding day and she didn’t take it well,” he said.

The couple got married on Heritage Day 24 September in a small church in Motherwell, Port Elizabeth. The wedding cost them only R6000 and they have nothing to regret for the move.

“We don’t have any regrets on how everything turned out however, we regret not inviting the people who we really wanted to be there.

With the remainder of their money, they bypassed all car dealerships, and went straight to Ford to make the deposit for a brand new car.

“We went to Ford directly because we were scared of being scammed for the second time. Our eyes were on the Ford Fiesta 2016 and we’re so happy about our choice, it’s the dream,” said Wongalethu.

The couple is currently enjoying the benefits of their decision of a memorable honeymoon in Thailand.