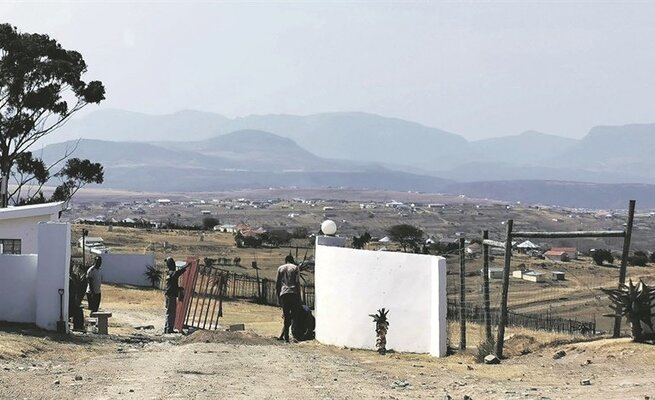 According to Ncunteni resident Vusumzi Sonteni the chief closed a crucial and strategic road, which starts at the N2 near Madzikane KaZulu Memorial Hospital, goes through the village of Ncunteni and joins the N2 on the other side of the Thwathwa bridge in Msane village.

He said the road also used to be used as a bypass by vehicles travelling on the N2 highway into and out of Mount Frere.

Sonteni said the road was closed as far back as 2015, but reopened two days before the May elections after residents had threatened to boycott the elections.

However, Diko closed it again immediately after the elections.

“We have reported the matter of the road to everybody … but nobody dares to touch him because he is apparently powerful. I don’t know, maybe it is because his wife works in the office of the president and people are scared of him,” said Sonteni.

Another resident, Khanyisa Ngqwala, said the main problem was that the chief chose to close the road unilaterally without their consent as villagers.

Maliviwe Gubelana alleged that a housing project came to a standstill because the chief chased away one of the project managers, saying they were being disrespectful by wearing short pants during a meeting at the royal residence.

It means I cannot go there to seek refuge if a man is attacking me or I have been raped. I have to go home first and put on a dress, otherwise I will not be allowed at the royal residence

Pretty Sogoni said the White Door centre was becoming a white elephant because most people in the village did not use it.

“For instance, as a woman you cannot visit the centre wearing trousers. It means I cannot go there to seek refuge if a man is attacking me or I have been raped. I have to go home first and put on a dress, otherwise I will not be allowed at the royal residence,” she said.

Baxolile Nodada, DA MP in the National Assembly, visited the village last week to get a first-hand account of the villagers’ grievances.

Nodada, who is also the constituency leader of the DA in the Alfred Nzo District Municipality, said he had written to Diko to hear his side of the story.

He said the opposition party was planning to take the matter to court.

“The road was opened two days before the elections because the community threatened to not vote, and closed two days after elections. Because it’s a political issue and the Dikos could see that this was going to affect the ANC, they opened the road and waited for elections to be over and closed it again after people had voted.

“This shows there was absolutely no reason for the road to be closed in the first place,” said Nodada.

He said the DA would raise the matter with the South African Human Rights Commission.

“Khusela is aware of this thing. I mean, she is married to the guy, they stay together there. I met her (last Thursday) in Parliament. She is aware,” said Nodada.

But Khusela denied ever meeting Nodada.

“I don’t know who Baxolile Nodada is and I am not aware of any conversation with him, informal or otherwise.”

“But all those engagements failed because the chief said he would not open the road because, according to him, the road was on land belonging to his family. He then informed us that he was going to take the matter to court,” said Zembe.

She confirmed that the road in question was on the municipality’s map and an access road.

Nkosi Mwelo Nonkonyana, chairman of the Eastern Cape House of Traditional Leaders, said the matter had been raised with him.

“I can confirm that the community did write a letter to me. I know that Nkosi Diko is the leader of the Congress of Traditional Leaders of South Africa in that region.

“I appealed to him to assist us to resolve that issue. He promised to come back to me. I hope we are going to solve that particular matter sooner rather than later,” Nonkonyana said.

Diko said he was not a chief (iNkosi), but the king of AmaBhaca.

He did not understand why people would say he was ruling through fear, that they were afraid of him or that he was abusing his power.
This thing that people are afraid of me because my wife works closely with the president is just ridiculous

“I am not above the law, because the law applies to anyone and everyone. It’s not true that the municipality and the police were afraid to act against me.

Diko said the KwaBhaca Traditional Council resolved at a meeting in 2010 that the road be rerouted and diverted, not closed.

This was to be done as part of development and making the road closer to the community by rerouting it so that people could easily access it through public transport.

He said the decision of the traditional council to reroute the road was binding to everyone, including himself, and could not be changed by a few individuals in the village who had been waiting for eight years since the decision about the road had been made.

Diko disputed claims by the municipality that he said he would take them to court over the road.

He also refuted claims that he chased people from the royal centre.