Strange than fiction! While it is common that some children are born through medical operation in theatres, as the doctors' last resort for the safety of the mother, child or both some are born through wombs that would have been gruesomely ripped open.

Hope's birth was not unique only because she was born through some kind of an operation, but she was born as a result of a brutal crime, after her heavily pregnant mother, was murdered by a neighbour who opened up her abdomen with the intention of wanting to steal the unborn baby.

Seven years ago, Hope’s mother, Valencia Behrens, aged 35, was lured to a house in Toekomsrus, a township in Randfontein, Gauteng, by a neighbour who lied that she wanted to give her a spare pram and baby clothes, but instead killed her.
The neighbour Loretta Cooke (then 30) who was desperate to have a child decided to steal someone else’s unborn baby.
When Valencia arrived, Loretta tied her up and, used a razor blade, cut open her abdomen, so that she can steal the baby she also made a cut on Hope’s head in the process.
However, while her mother bled to death, the infant miraculously survived, and she was discovered lying in a pool of blood, still attached to her mother’s uterus. She had to spend a few weeks in hospital before her family was finally given the right to take her home.
“The scar will never go away, and neither will the void left by the terrible loss of her mother,” said Hope’s paternal grandmother, Siena Pieterse (85), who’s been helping to raise her since birth.
As she entered the living room of her grandmother’s home, dressed in her smart school uniform, the little girl stopped and greeted the visitors softly.
Hope, whose real name can’t be revealed, to protect the minor's identity is a bright Grade 2 learner who attends a nearby primary school.
She entered the room from school just in time a local publication visited her home for this follow-up story.
“She knows what happened to her mother,” Siena told the publication as she entered the house.
Siena has for years, been wondering how she was going to tell her grandchild about what happened to her mom, but in the end she decided it was best to let her know the truth.
“She and her siblings will tell you that their mother is in heaven,” she said.
After Valencia's death the elderly Siena saw it fit to step in, and helped her son, Joseph, to raise his five children, including the miracle baby Hope.
When the publication arrived, Joseph just stepped out for a while but his sister, Jeannie Davids (49), and Siena welcomed the news crew.
Jeannie recalled the fateful Friday of 6 January 2012 very well. “What a day it was,” she said. “I was doing some laundry for a neighbour when someone told me something had happened to Valencia.
“I ran to Loretta’s house and when I got to the front door I was told to go around to the back,” she recalled.
“When I got there I saw Valencia lying there outside, covered. People who were standing around told me she had fallen and that I was too late because she was dead already.”
She remembers seeing Valencia’s red dress could protruding from under the covering. When police arrived and lifted the cover, she was disturbed by the scene.
“Police told me she’d been cut open,” she said.
Joseph, who was a part- time painter, had already been notified and was on his way to the clinic where neighbours said Loretta’s mother, Matilda, had taken the baby.
No one seemed to know what had happened. People had seen Valencia for the last time when she walked to Loretta’s housed supposedly to fetch the baby things she’d been promised. 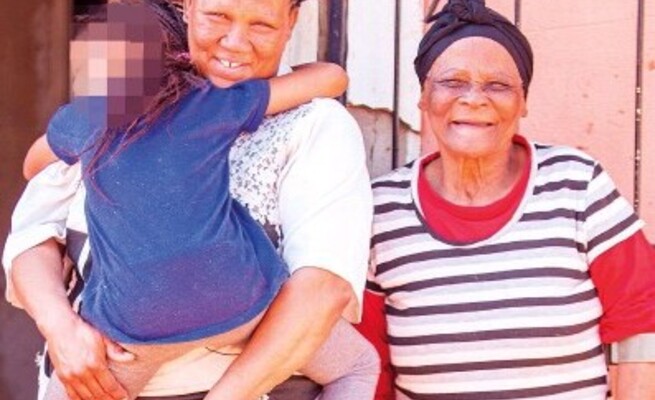 Meanwhile, during court hearings it emerged that Loretta had been faking a pregnancy, to the extent of fooling her colleagues who threw her a baby shower.
But it was all a lie.
After she was arrested Loretta maintained that she was innocent, alleging that Valencia had cut herself, but in 2014 she was convicted of murder and sentenced to life in prison.
During the publication’s visit, Hope was too shy to speak to the news crew, but Jeannie told them that the children were doing well, although two of them have had a few problems along the way.
“The eldest finished matric last year, although with problems. She failed it the first time but now she’s done,” Jeannie said; “Her 13-year-old sister is also struggling. She developed epilepsy about two or three years ago.”
She added that the good thing was that they were now coping, and attributed it to a policy of openness in the home, as the kids are encouraged to talk about their mother as much possible.
“Her children were always around her. She loved them very much. They were very important to her,” she said.
Jeannie could not hide the fact that she is still yet to come to terms with what happened.
“It’s still hard for everyone. But we can’t all break down. Someone has to be here and remain strong. I break down on my own but when the children are around I can’t,” she narrated.
She added that currently no one in the Pieterse household is employed and as such, Valencia’s cousins and aunts frequently help them out with things such as food and money for the children.
Should chance permit, the Pieterse would like to meet Loretta, so that she explains to them why she did that cruel act.
This would help them find closure and help them move on. However, as if to add salt on the wound, Jeannie said whenever members of her family bump into Loretta's mother she doesn’t want to talk to them or pass a mere greeting.
Though Loretta once sent them a message that she wanted to meet them if time permits so that she can apologise, Jeannie said they are not interested in the sorry part, but the reason why.
“Only she can tell us the whole story but she doesn’t want to.
“We don’t want to hear the sorry. We want to hear the why.

“Why did she do what she did to Valencia? If she can’t tell us, she can’t say she’s sorry,” said Jeannie.