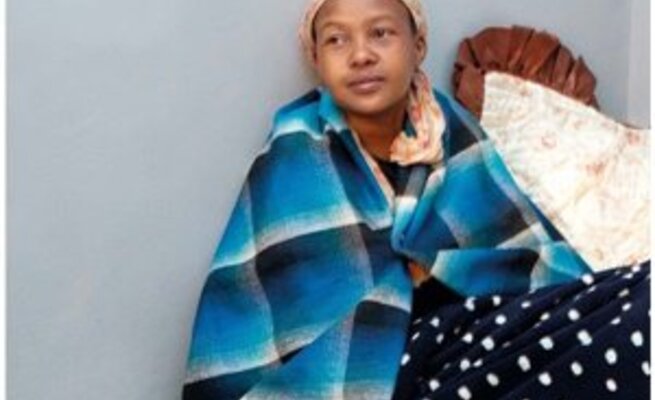 Lucia Ndala (27) can best describe herself as a person who is walking, but dead, after
losing her three beloved children, Thabang (11), Amogelang (3) and sweet toddler,
Lebogang (1) who were murdered by her ex-boyfriend, Tebogo Mojutu (29).

Mojutu is the father of her youngest child, he killed the kids by hanging them, before
committing suicide afterwards.
Lucia is not only devastated that her children were murdered, but it is also the images of
the dangling bodies of her beloved children which will torment her for life. It keeps
floating in her head.
For her, time is cruel in that it passes in irreversible succession, she wishes she could
turn back the hands of time.
“I would delete the part of my life where I met him. My children were my world and he
knew it. He took away everything I lived for. It feels like a horror movie but it doesn’t
end. He killed my children in the most brutal manner,” she told SowetanLive.
The fathers of her two older children are also devastated, she told DRUM magazine,
that they don’t even know how to manage the situation.
“As for me, I am physically alive but dead inside. All I can do is forgive and free the
spirits of my children. Having seen the scene, I have no one to be angry with. He’s gone
and so are my children. I forgive him. I can’t be angry with his family, they didn’t kill my
children,” she said.
The cruel act also left Tebogo’s family shell shocked, his brother Johannes, the first to
arrive at the crime scene, said;
“My brother never spoke about his problems. He had tried to kill himself twice before –
the last time was in March when he took poison. We are devastated because we know
he loved these children.”
Tebogo was a driver, who ferried schoolchildren in Soshanguve north of Pretoria and
Lucia’s kids were among his everyday passengers.

According to Lucia, on the fateful day 27 May 2019, he arrived at the home she shared
with her children in the morning to pick them for school and day-care.

“I told him they weren’t going to school that day because Thabang wasn’t writing exams
and the two little girls weren’t feeling well. He asked to see them anyway and I let him,”
Lucia narrated.
He spent a few minutes with the children and then left.
Lucia who had gone out, returned to the news by a neighbour that Tebogo had come
back to her house and took the children with him.
“My neighbour said she was worried about the youngest one because she could see
she wasn’t fully dressed and it was cold. I called and asked him why he’d taken the kids
and he said he was taking them out for pizza because they’d asked for it. He promised
to return them soon,” added the grieving mom.
Lucia was suspicious of her ex-boyfriend's move, as it was too early for most shops and
restaurants open only at 9am. She hurried to the police station and made a report that
Tebogo had taken her children without her permission and also to seek a protection
order against him. On her way to the police station, she phoned him only for Tebogo to say; “How would you feel if I killed myself and the children?
“I told him I would be hurt but I knew he would never kill my children because he loved
them too.
“He then said, ‘I wish I could make you feel the same pain you’re causing me when you
say you no longer want to be with me’.”
He then called Lucia again, requesting an answer to his horrific threat.
“I told him there was nothing I could do, I would just be hurt if I found out he’d killed my
children. He said, ‘Okay, just know I’m going to kill myself with the children’.”
Tebogo then gave the phone to the two older children, who told their mother that they
loved her. She could also hear Lebogang repeatedly shouting for her in the background.
When she arrived at the police station Lucia pleaded with the police to send a patrol van
to Tebogo’s home, but they were too slow.
“While I was at the police station I had a sharp, cutting feeling in my stomach. I had a
feeling he had done what he said he’d do,” she said.
Johannes arrived at the family home few moments before the police and found all four
of them, hanged in Tebogo’s bedroom. It’s suspected the children were poisoned first,
before being hanged.

Flashback, it was love at first sight, when Lucia and Tebogo met in 2016.
“He seemed like a really good man. He was aware I had two children with two other
men and he accepted my situation,” she said.
Lucia went on to be in good books with Tebogo’s family. She and her kids started
staying with Tebogo and his four siblings in Block W in Soshanguve.
The two lovers later had a child of their own, little Lebogang. Suddenly all hell broke
loose, Tebogo started cheating on/ and hitting her.
“We’d argue about his affairs and he would beat me for asking questions. He’d
apologise and promise to change, but that never happened,” she said.
She and her children then went on to live with her aunt who was sick.
“He accused me of leaving so I could cheat on him. After my aunt passed away he beat
me badly and tried to strangle me. I still have marks on my neck from the incident.
That’s when I decided I’d leave him because I believed he was capable of killing me. In
April I called it quits for good,” added Lucia.
He did not end there, Tebogo was now in the habit of threatening her with murder.
She told the publication: “He’d say things like, ‘One day I’m going to kill you and the
children’.”
His brother, Johannes said Tebogo tried to kill himself just after the funeral of Lucia&#39;s
aunt. He then called Lucia and told her he had taken rat poison.
Lucia phoned Johannes and alerted him, who later found Tebogo and took him to
hospital. Though the family took him for counselling, they were still distributed by his
behaviour.
“We have so many questions and no one to answer them. He should have