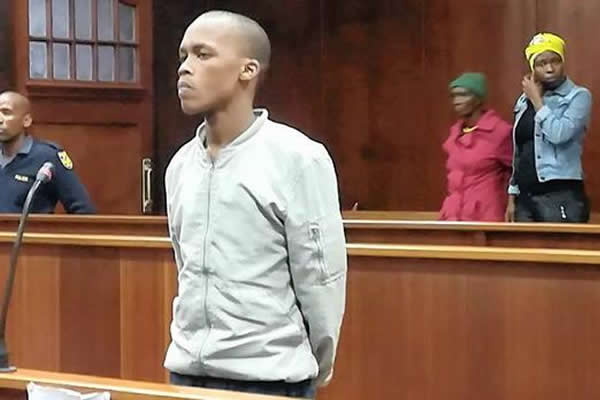 KRISHNIE Mahomed took deep breaths and held a hand to her temple as she heard how her husband was stabbed multiple times.

Father of two, Naieem Mahomed Sheik, 37, was butchered with an Okapi knife in the grocery store he managed in Durban, allegedly after he cut his employee’s R100-a-day wage to R60, was abusive to him and gave him a rotten pie with worms in it to eat after firing him.

Innocent Hadebe, who worked as a trolley attendant after being fired as a packer at the Cowey Road store, pleaded guilty in the Durban High Court on Tuesday to a charge of murder, as well as theft.

“The deceased would use vulgar language in front of other staff members when talking to me. Most of the time he would call me k ***** and this made feel belittled.”

When his grandmother died late that year Hadebe said he approached Sheik and asked for a few days off so that he could attend her funeral.

“He said to me if I leave, I must not come back. I returned to work the following week. I went to him and reported that I was back at work. “He shouted at me in front of other workers and used vulgar language.

“He further told me that someone was employed in my place. I accepted his decision and requested if I could help the customers by packing their trolleys and pushing them to the parking area and unpacking them. He agreed. I did this for a few days until the day of the incident.”

Hadebe said he had hated going to work. “Two days before the incident the deceased called me to his office. I noticed that there was a pie which appeared warm. He told me to take it and eat it. I took it and thanked him. I then left his office. I went outside and sat behind the store. I opened the pie and immediately saw that it had some worms. This made me very angry. I sat for a while and cried.”

Hadebe, of Inanda, said that at about 7pm on the day of the murder he was about to leave when Sheik asked to remove all the perishable fruits and vegetables from the shelves and place them in the cold room.

“I asked him if he was going to pay me for this work. He became very angry and started shouting at me. For the first time since I met him I had the courage to confront him. I also raised my voice and told him this abuse must stop. He told me that I was a small boy and that I will never do anything to him. He further told me that he did not want to see me at the store the next day.”

Hadebe said he did not know where he got the courage from. “I approached him… Everything that I have gone through just flashed before my eyes. I had so much anger that I just wanted to hurt him. I remembered that I had the knife in my pocket. I pulled it out and charged towards him.

Hadebe said he went through Sheik’s pockets and took his wallet. He also took R45 000 from a cabinet and two cellphones.

He said he was remorseful. “I wish to extend my genuine apologies to the family of the deceased.

“I also want to apologise to my family. I know I have caused heartache and disappointment to all families. I am sorry.”

Holding back tears, Mahomed, 39, told POST that Hadebe had lied in court, “especially regarding why he murdered my husband”. She said on the morning of the murder, Hadebe had told his family he wouldn’t be returning home because he had “come into money”.

“He had obviously planned to rob my husband.” Mahomed said she had seen the video footage of the murder. “After the first few stabbings, my husband was unaware of what was happening. He handed him the keys but he still kept stabbing him.”

She said her husband was not the type of person who would give someone a rotten pie. Life for her and her children had been tough since his death.

“We had to move and the kids are taking it badly. My father-in-law recently committed suicide because Naieem was his sole provider and he’s been so lost and depressed.”

Sentencing was to have taken place on Wednesday.