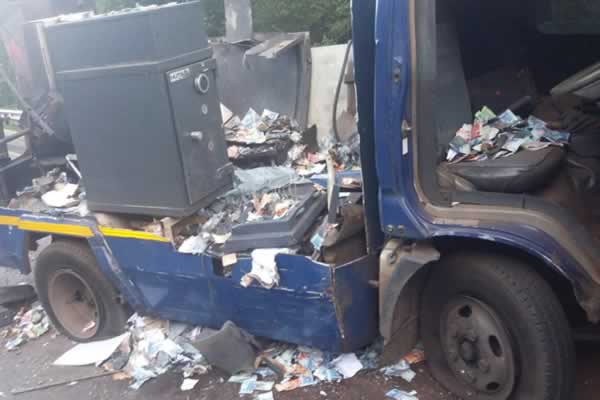 Gauteng has the unwanted tag of being labelled the top province for cash-in-transit heists, while police are no match for the bravado of these dangerous criminals.

The brazen and dramatic robbery that shocked Boksburg residents early on Thursday was the 10th to occur in the province in the past two weeks, according to a source within the Hawks’ National Bureau for Illegal Firearm Control and Priority Violent Crime. So far this year, Gauteng has recorded an average of eight to 12 robberies per month.

“Cash heist robbers have become brazen and there are a couple of contributing factors. One is that people are living in abject poverty, and crime seems to be the only way out for them. We have also picked up on videos of the heists shared on social media that they have had some form of military training,” according to the source.

“It’s in the way they carry their assault rifles when they execute these crimes. They carry them in a certain way that an ordinary police officer doesn’t. They are professional, well trained and use tactics that are only taught in the army,” the officer said.

He said the use of extremely loud explosives to gain access to armoured vans was one of the common scare tactics applied to frighten bystanders.

“That is why they can execute this crime in heavy traffic and in broad daylight,” he pointed out.

The portfolio committee on police on Thursday said it would invite all stakeholders from major private security companies, Business Against Crime, the SA Banking Risk Information Centre (Sabric), the Private Security Industry Regulatory Authority and the Private Security Association to a meeting next month to try to find solutions, chairperson Francois Beukman said.

Motorists were forced to brake and veer off the road, while pedestrians and street vendors took cover when a gang of more than 10 men armed with high-calibre assault rifles targeted two cash vans after they had collected cash from a depot in Ekurhuleni.

Video footage circulating on social media showed the gunmen travelling in an SUV and BMW 5-Series, shooting at the two vans and forcing them to stop at the busy intersection of Atlas and North Rand roads.

A two-minute gunbattle erupted between them and the guards before explosions rocked both of the vans. The thugs fled the scene with an undisclosed amount of cash, leaving behind seven bags of cash.

At least eight people – including two pedestrians and two guards – were injured. Five robbers were later arrested on the M2, and police searched for more criminals at George Goch Hostel near City Deep.

Dr Johan Burger of the Institute for Security Studies blamed the police’s poor intelligence in tracking down criminals and their inability to handle firearms, as major contributing factors in the spike in cash heists.

“These criminals know how to select their members based on their capabilities to handle firearms, drive fast cars and use explosives. Looking at these qualities, an ordinary police officer would be totally disadvantaged. Our police shoot poorly because the majority of them have failed gun competency tests,” Burger pointed out.

“Criminals don’t fear or respect the police because they are far advanced and, in some instances, have military training to their advantage,” he added.