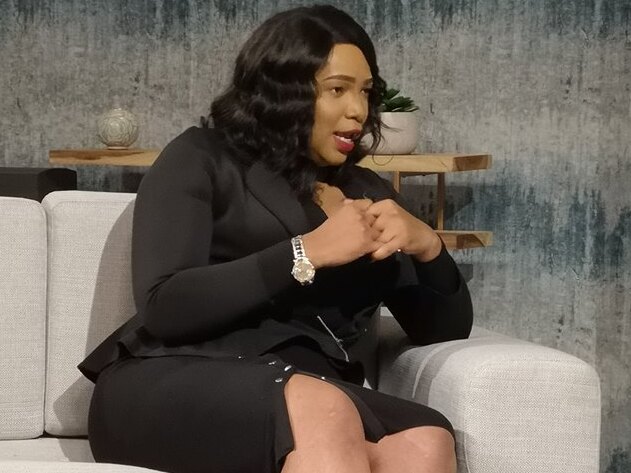 SINCE childhood she knew she was different from other kids. Azara Raphael’s journey to truly become herself, as a transgender woman in South Africa, has been a painful one marked by abuse from relatives and discrimination in her community. Now she’s sharing her story as a beacon of hope to others.

She wants people to know there are many transgender women out there, and they’re just like everyone else. “We have careers and families, and the only thing we can’t do is bear our own children, but we are who we are.”

Azara (34) has always known she is a woman in a male body.

During her childhood she had the unflinching love and support of her parents. “I have always been comfortable with myself and my sexuality because of the support from my family. They never treated me any different from my two younger siblings or cousins,” she tells us at her home in Midrand.

Her parents, South African mother Juliet Maseko and Jamaican father Michael Raphael, allowed her “the freedom to express myself however I wanted, with my dress or hairstyles”.

“They taught me to stand up for what I believed in and to never seek validation from anyone. From a young age I knew what I wanted, and I knew to call out treatment I didn’t like,” she tells us.

The financial consultant and gender activist was born in Soweto as Vusumuzi Maseko and grew up across the continent as her father’s work took the family to Kenya, Zimbabwe, Mozambique and Angola.

When Azara was a teenager, her father told her she needed to work extra hard at school. “So I could afford a better life for myself because I was different from other children. He told me

not everyone would understand how I look, and that there would be people who would try to dim my light because of my sexuality, and I shouldn’t allow it.”

When she was nine her parents split up “and my bubble of protection burst”.

SHE moved with her mom to a flat in Berea, Johannesburg, and her mother began dating the man who would become her stepfather.

Azara quickly learnt just how cruel people could be. “He would tell my mother, ‘ Your son will be f***ed by other men’, and he didn’t care if I heard him or not. He’d belittle me at every opportunity and refer to me as Queen Elizabeth.”

Life was awful at home, and at school things were no better. She was bullied and ostracised by fellow learners and teachers because she was different, Azara recalls.

“Parents would tell their children not to play with me at school or after school because they said I would teach the kids how to be gay. Teachers would also mock me about how I walked, dressed and spoke.” Being an outcast affected her self-esteem badly and she became withdrawn, only speaking when spoken to in class, and taking part in fewer and fewer school activities.

She hated her penis and would take baths in the dark to avoid seeing it. “I’d also tuck it away. That was a painful exercise.”

At around age 14 she became obsessed with getting rid of the body part. “I researched like a mad person about amputating it. A friend even told me about people who would let a crab bite them so they could change their sex.” Frustrated and desperate, Azara took a razor blade to herself and tried to amputate it. “I was bleeding so badly that I had to be rushed to hospital to receive medical attention,” she says.

She later found out about a medical procedure to remove testicles at Life Carstenhof Hospital, and with the help of an older friend who posed as her mother because she wasn’t yet 18, she underwent the two-hour surgery. She was in excruciating pain once the morphine wore off after the surgery, “but

I was happy that one part of the unwanted organs had been removed.”

Azara celebrated her 18th birthday by going to home affairs to legally change her name and gender, as she was going to university the following year. “My plan was to have a new name and not to be enrolled as a man,” she says.

“For the gender change they needed an affidavit from the police and a letter from my doctor, as well as an independent doctor who had examined me and approved my request for the change. For the name change I only had to fill in a form indicating my reasons and my new name.”

STILL, she wanted her outward appearance to reflect how she felt on the inside. “I always knew I was a woman born in a man’s body.” In 2010 Azara underwent a complete sex change at a clinic in Thailand. She paid for it using the R250 000 she’d been given by a financial organisation towards her tuition, but her parents later gave her the same amount of money to pay for her studies.

The operation was a success “and after months of recovery and rehabilitation treatment I was in love with my new looks. I no longer had to live through the pain of tucking my manhood between my thighs and covering it with underwear to ensure it didn’t slip out.

“I had become the woman I always wanted to be.”

Azara, who is single at the moment, would like to settle down and start a family when she finds her soulmate. “Because biology doesn’t allow for me to have my own children, I’m toying with the idea of adopting two children in the near future.”

Being a transgender woman can be dangerous, says Azara, who was raped in 2015 after her drink was spiked in a club.

“I woke up with a bad headache in a bed I didn’t know. Everything that happened the previous night was a blur. People take advantage of transgender women – they want to experiment with us and see if we are sexually different from other women.”

As a board member of Access Chapter 2, a non-profit organisation which advocates for the rights of LGBTI+ (Lesbian, Gay, Bisexual, Transgender and Intersex) people, Azara says she always tells transgender women “not to disclose their sexuality to anyone, as they don’t owe anyone an explanation.

“The reality is that we are living in a dangerous society and people will take advantage of you and want to experiment with you,” she warns.

“I encourage women not to seek validation or approval from anyone – you’re perfect as you are.”