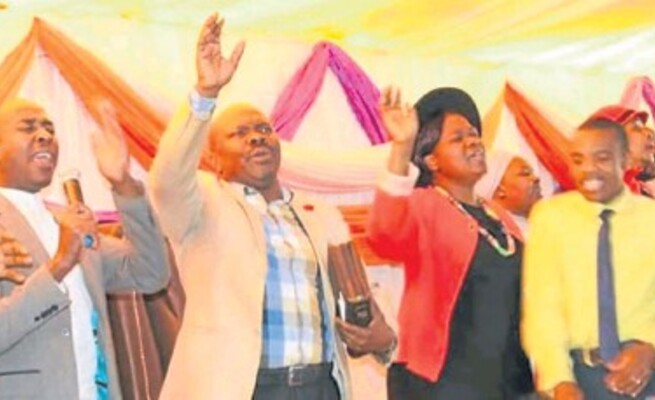 A community leader and member of the Zion Christian Church (ZCC) in Boksburg has accused a popular televangelist of impregnating his wife of 20 years.

The man, a member of the local community policing forum, has also accused his wife of starving him of sex for six years, while consorting with her alleged pastor lover.

He said his wife also abused him emotionally by insisting on bathing naked in his presence, while refusing to allow him to touch her.

Among other accusations the man levelled against Revelations of Christ Apostolic Mission Church founder Pastor Zabulon Buthelezi was that the man of the cloth was insisting that the jilted man allow his daughters to come to his church against his wishes.

All these details are contained in the man’s affidavit filed in support of an application for a protection order against Buthelezi.

He approached the Boksburg magistrate’s court last month and told officials Buthelezi was threatening his life after he confronted him about allegedly sleeping with his wife.

In the application, he said Buthelezi was at the centre of numerous conflicts with his wife.

Among some of the conflicts he mentioned during an interview with Sunday World was that his wife had been refusing to sleep with him for years, allegedly because of their clash in religious beliefs after she joined Buthelezi’s church.

He is a member of the ZCC and said his wife used his religious beliefs to deny him his conjugal rights.

“Every time I tried to touch her, she would parry my hand and threaten to open a case of rape against me if I continued to try my luck,” he said.

He said it was his confrontation with the pastor about his daughter’s late-coming from his church that had led him to discover the alleged affair.

He said all along the pastor had been visiting his home but he had never suspected that his wife and the man of the cloth were cuckolding him.

He said upon his discovery he sought a meeting with Buthelezi during which he laid bare his problems with him.

But he said the pastor responded by saying that he never herded cattle with him and therefore should not ask him such things. He claimed that the pastor threatened to punish him, saying that he had more power than him.

He said a few days later, in late June, the pastor called him and insulted him saying that his wife was ugly. “He said he has a lot of beautiful women at his church, and he is going to deal with me because I dirtymark (sic) his name,” he wrote in his court papers.

When confronted with the allegations just before the court proceedings in Boksburg this week, Buthelezi declined to comment on the matter.

Sunday World could not attend the court hearing but learned Buthelezi refused to subject himself to a paternity test to determine if he was the father to the man’s wife’s child.

The child, according to the man, was born on June 22.

The matter was postponed to September for a decision on whether he would be granted the order. His wife declined to comment.

“Every time I tried to touch her, she would parry my hand and threaten to open a case of rape against me”