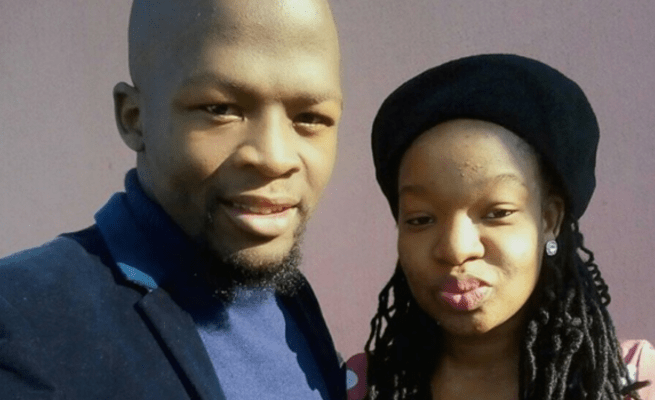 A Vereeniging couple spent just R75 on a wedding and they say it’s the best decision they ever made.

Instead of spending thousands on a lavish wedding ceremony, Samkelo and Latoya Khowa decided to get married at a home affairs office.

When the duo met three years ago, the stars were aligned and Samkelo knew Latoya was going to be his wife one day.

“From the first day I met her I told her that I will marry her and she didn’t believe me. She thought I was just another guy toying with her. But I kept telling her that,” he tells Move!.

he 25-year-old from Welkom was a broke man who was struggling to get by and would sometimes sleep on an empty stomach at the time.

He says life was no walk in the park for him as he was forced by financial circumstances to drop out of college and find some sort of income.

Luckily for him, in 2016 he found a learnership that paid him R2 600. But it wasn’t enough to cover all his living expenses. At the time, Latoya was still a college student depending on her parents for financial support.

Latoya used to help him with whatever little she was getting from her parents.

She used to help me with her allowance,” he says.

Sam was hired on a permanent basis at the company he was doing his learnership. “After getting a permanent post as a Quality Inspector, I started saving because I was not used to the increased money and put R500 away every month.”

“I then asked my parents to go ask for her hand in marriage in Limpopo. Her family appreciated that I came, and she was not pregnant at that time. Things went well. On the 9th of December we went to church for an engagement little celebration. Our families were both there and the pastor blessed us. We wore rings on that day and they both didn’t cost us more than R2 000,” he says.

They then went to make things official at Home Affairs where they paid R55 for a marriage certificate and R20 to release it.

Latoya says she doesn’t regret her decision to get married at Home Affairs.

Samkelo who is a devoted Christian says it’s important to know the difference between a wedding and marriage and they chose to value the latter.

“When we were getting married, we didn’t have a car. After we did all this, we bought a car. If we had hosted wedding we’d be walking on foot,” he says.

“It worked for us,” says Latoya.

Sam is head over hills in love with his newly-wedded wife. “She is so humble and respectful. I was not the way I am now when I met her. She saw beyond my suffering. She loved me and I saw that,” he shares.

The spark between the duo is heavenly made. Latoya says that’s one of the things she loves about his husband, that he loves God like her. But points out that he talks too much. However, he’s honest, humble and passionate.

“We are happy and don’t care what people say,” they say in unison.

They’ve moved in together and tell Move! that they’re expecting their first born. The proud dad-to-be can hardly contain his excitement. “We can’t wait,” he says.