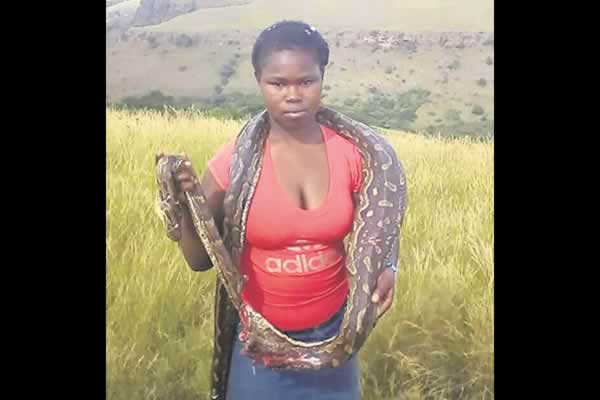 KHOMBI Dlamini (21) saw two grown men running towards the village and pointing nervously at the bush where they had come from.

They warned all who could hear that there was a big snake there, but Khombi still had to go out to collect firewood.

Now the brave young woman is the hero of her village. When she came upon the python, she hacked it to death and discovered it had been feasting on villagers’ goats.

Khombi, from KwaMaphumulo in northern KwaZulu-Natal, said she found a python about 2,5 metres long blocking the footpath on Sunday.

“I saw two men running away, saying they’d seen it. I then took a hoe, my bush knife and asked my older brother to go with me to collect firewood. I found the snake lying in the footpath and realised its head wasn’t facing me,” said Khombi.

She crept up on the snake, making sure it didn’t notice her.

“My brother told me to stop and stood some distance away. I hit the snake’s head with force using the hoe. It tried to fight back but I hit it on its body. I chopped at its stomach and a dead goat fell out. That was when I realised it had stolen our livestock.”

Khombi said her brother posted pictures of her on social networks. While she’s happy to have killed the livestock thief, Khombi said it might have also brought her bad luck.

“Men are scared of me now. I went to the shops on Monday and local men told me they’re scared to ask me out because I’m too brave.”

Her brother, Bonginkosi Dlamini (29), said: “Khombi’s brave and not afraid to face challenges, but I never thought she could kill a python.”

Resident Nonhlanhla Gabela (54) said pythons were terrorising them by eating their livestock.

“We thank Khombi for being brave enough to kill the python. She’s our hero.”

KZN Wildlife spokesman Musa Mntambo said Khombi should have reported the python to them instead of killing it.

“We don’t encourage people to kill these dangerous animals by themselves because they can get hurt,” said Mntambo.

Councillor Zimisele Ninela said: “This woman is a hero. Maybe one day she will lead the country.”