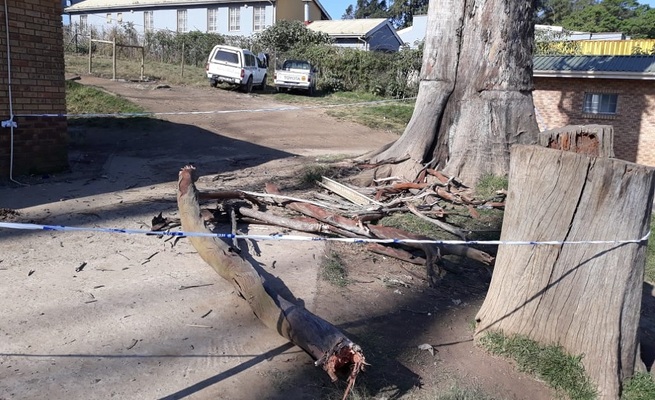 IT’S a long drive from Lusikisiki to Mthatha. The R61 linking the Eastern Cape towns is straight but beautiful, fringed by farmland and rolling hills. But for Phatheka Gani, it’s a journey that will forever be tainted by dread and anguish. Each minute of the nearly two-and-half hour drive was accompanied by a growing sense of fear that she’d never see her young son, Asenathi, alive again.

She knew things were bad. Asenathi (10) had been airlifted by helicopter from Lusikisiki with a severe head injury after being hit by a falling tree branch at school.

He was unconscious when he arrived at Nelson Mandela Academic Hospital in Mthatha less than 30 minutes later, while his mother was barely a quarter of the way there.

Phateka rushed to the hospital, accompanied by her son’s teachers who had driven her there. Her heart was pounding as she asked where her boy was.

Phatheka clung to the hope that he may be okay. After all, why would he have been airlifted to hospital if there wasn’t a chance he might be saved?

But her hopes were soon crushed. “I’m sorry,” the doctor told her. She was too late.

Asenathi had dreamt of becoming a pilot and Phatheka, an unemployed single mother, prayed her son would one day be able to soar above the clouds. Instead the only flying he would be doing was with the angels.

“My son was mad about flying,” the heartbroken mom says.“He’d make his own kites and fly them, telling me he’d one day fly an aeroplane.”

But that helicopter ride to hospital would be the first and last time he would take to the skies.

DANGER TO THE CHILDREN

That Monday, 15 July, started off like any other school day.

Asenathi, a Grade 6 learner at Lusikisiki Village Junior Secondary School, had been in the playground with friends Lindokuhle Dweba (12) and Alondwe Nqubula (11) when they heard a loud cracking noise.

The next moment Asenathi was unconscious on the ground, blood gushing from his head. Lindokuhle and Alondwe screamed for help, clutching at their bloodied hands, which had been hurt by the falling branch.

The branch came from one of the 20-odd gumtrees that ring the school. Parents had long complained about the trees, saying they posed a danger especially when strong winds blew.

Malibongwe Mtima, spokesperson for the provincial education department, says the school has an annual maintenance budget that could have been used to cut down the trees. If there weren’t enough funds in the budget, he says, the school should have asked the department to intervene.

That’s what they did, says Nomboniso Sigcau, chairperson of the school’s governing body (SGB), adding that their pleas to the education department for the trees to be trimmed or cut down had always fallen on deaf ears.

For the past seven years they’ve been asking the education department to remove the trees or relocate the school.

She says the cost of removing a single tree was more than R20 000.

“Just last October we again reached out to the provincial [education] office and were met with promises but no real commitment. “Now our worst fears have come true.” Her grandson, who is also a learner at the school, is haunted by the sight of his schoolmates lying hurt beneath the deadly tree.

In the days after Asenathi’s death, Fundile Gade, the province’s education MEC, promised the trees would be cut down – and this time, there was delivery on the promise.

They have started cutting back the trees and the school has temporarily been suspended to allow learners and teachers to go for counselling.

But it took a tragic death before anything happened – and for Phatheka, it’s too little, too late.

“I blame the government because we have been asking for these trees to be chopped down for a long time,” the devastated mom says.

“Now this has happened and my child is gone.”

She had hoped Asenathi would succeed in life and help change his family’s fortune by building them a house of their own, she says.

As an unemployed mother, she and her two remaining kids live at her family’s home where everyone struggles to get by on their social grants.

“I was invested in educating my child. I even arranged the school transport to make sure he was getting there safely. He lost his life at his school that he loved so much.”

Phatheka is unable to hold back her tears as she tells us how teachers rushed to her home to tell her the terrible news, and offered to take her to St Elizabeth Hospital in Lusikisiki.

There she was met with the horrible sight of her son, his skull cracked open badly enough that his brain was visible.

“Asenathi was still alive and the doctors were busy with him.

“I burst into tears when I realised his chance of survival was slim.”

Doctors decided Asenathi’s best chance was to be treated in Mthatha, and he was airlifted there.

Phatheka made arrangements for a friend to look after her baby girl, threemonth-old Lingomso, and the teachers drove her to Mthatha.

“When we got to the hospital the doctor told me Asenathi had died.

“He said that even if he had lived, he would have been mentally disabled or even brain dead.”

Asenathi’s two friends survived the branch, but both boys are traumatised by their friend’s death and their terrible injuries.

Lindokuhle’s right middle finger had to be amputated, his grandmother, Nozamile Bhontshi, says.“He is still in hospital. My grandson may no longer be in much physical pain but emotionally, he’s not okay.”

Alondwe’s mother, Nompumezo Nqubula, says she won’t allow her child to return to the school until it is safe again. Alondwe also injured his hand when the branch fell.

General News Muza Mpofu - 27 October 2021 0
An investigative report released on Wednesday by Independent Media during a press conference revealed the decuplets were born. The media group presented key findings from...