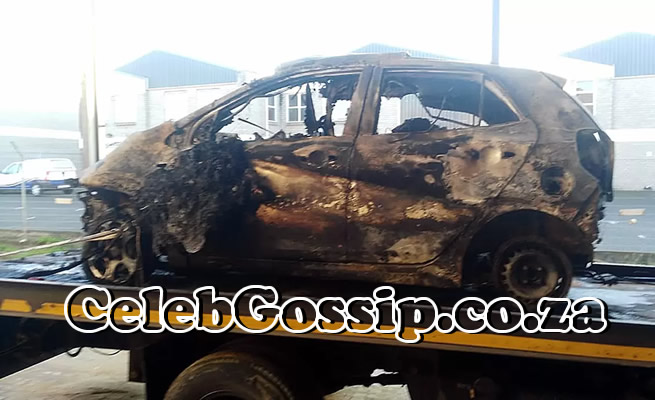 A night out on the town for a group of friends turned to tragedy when their car collided with a construction vehicle and they all burnt to death while trapped inside their car.

According to a police source, they rushed to the horror scene on Otto Du Plessis Drive in Table View shortly after 2am on Saturday to find the five friends screaming as the flames engulfed their car.

“Initially they were six all together and they went out partying for the night. There were three men and three women who were first partying and drinking in Joe Slovo and then they went to Melkbos to find a friend,” says the source.

The cop says the friends took the “dark back road” along the West Coast to Melkbos, but could not find their friend and drove back towards Milnerton.

“The one man, who fell out of the vehicle as it rolled, told us the driver lost control of his Kia Picanto and hurtled into a construction vehicle on the shoulder of the road. It was one of those vehicles used for tarring roads. He escaped with a few injuries, but his friends were trapped and the car caught alight. He flagged down a passing car and the police were called. It was horrific! We could hear them screaming for help as the flames [overwhelmed] them, but nobody could get to them.

“When the fire was extinguished, you could see melted limbs, like arms, being extracted. He was questioned extensively in the ambulance but said he only knew the driver and met the others for the first time that night. Their identities have to be confirmed through DNA tests.”

Another source on the scene said the bodies were so badly burnt that “they stuck to the metal” of the car’s frame.

Fire and Rescue Service spokesperson, Jermaine Carelse, says they received the call for help at 2.55am.

“A fire engine and rescue vehicle from Milnerton Fire Station were dispatched. Fire and Rescue Service extricated the bodies from the vehicle by means of the Jaws of Life,” he says.