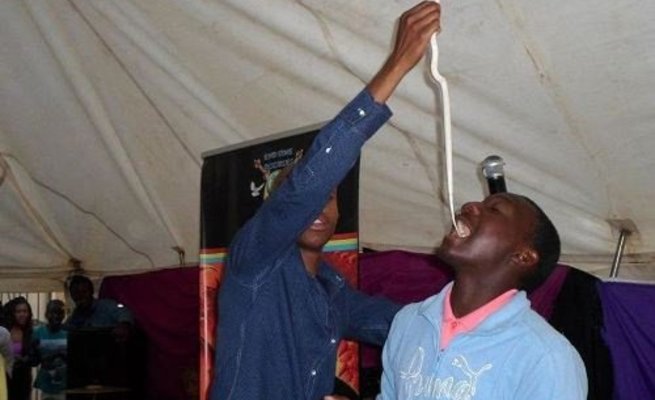 Controversial man of cloth, and Heaven on Earth Ministries church founder Pastor Peter Ratsatsi who at one time courted controversy for making congregants eat a snake, is back in the news for the wrong reasons again.

The not so new to controversy so-called man of God, recently brewed another, after he cooked and served a dog to his congregants in celebration of their one-year anniversary as a church in June.

Apparently, this is not the only time he has taken to the limelight for bad reasons, in a past not so distant, he uploaded videos of himself resurrecting a congregant, who he claimed had died after suffocation.

As if to stage manage the death, he asked a fellow church member ‘on camera' to perform a murder act by closing the mouth and nose, of another church member he passed out 'died' and he performed the biblical Messiah act by resurrecting the 'dead' man.

Pastor Ratsatsi (34) then went further to ask him to narrate what he saw in the other side of life; the spiritual world that many believe to be the destination for the departed. Pastor Ratsatsi is also the same 'prophet' known to have dangled a snake in front of allegedly ‘possessed’ church members whom he asks to bite it off piece by piece.

Such bizzare acts have since saw 'the man of God' earning a bad reputation for himself, being labelled a prophet of doom, who fakes and/ or stage manages miracles. His latest one, the cooking of dog meat and feeding it to members of his church has led some others shun it. As if to strike off the doubt, that it was dog meat he was going to prepare for his congregation members, he even posed in the video, with the dog before it gets cooked, the act angered South Africans and animal activists who viewed the cooking of dog as an act of cruelty to animals.

STANDING BY HIS BELIEFS

The unbothered pastor told Move! days after the public outcry that he stands by his beliefs and do not care what people think or say about him.

“I’m just disappointed that people are vilifying me instead of seeing the power of God through me, especially in light of our one-year anniversary.”

He went on to post pictures of the celebration on the church’s Facebook page, and a table full of colourful balloons, a cake, a plate of cooked dog meat. And wrote: “When you are the Son of God you take and eat. Nothing can kill you and you can eat everything. The spirit of God will minister. Don’t find yourself being deceived by the devil.”

It is reported that about 20 church members joined in the celebration, which was held in the beginning of this month, at the church in Mahikeng, North West, South Africa.

“What I do is a demonstration of the power of God. What good is it when you are sent by God when you are unable to perform miracles? Don’t just preach, show people what you do,” he boasted.

His church, Heaven on Earth was a thoughtful name he says, it is a depiction of what the church was all about, and he claims that the miracles performed in the Bible are by measure the same miracles he has been given powers to perform.

He lambasts those against him saying they do not read their Bible, urged such people to study the scriptures first before judging. “What I do is in the Bible,” he claims so.

Meanwhile, the Society for the Prevention of Cruelty to Animals (SPCA) raised concerns about the cruelty the dog faced at the hands of the pastor.

SPCA Inspector Meshack Matlou told Daily Sun that the dog must have died painfully. But the pastor doesn’t see anything wrong with what he did.

“It is a spiritual dog. This dog would just walk in and out of the room during sermons, it is my dog,” says the pastor.

Pastor Ratsatsi maintains that he want to change the perceptions of the people by doing the unthinkable.

“The snake they ate just came hissing in during a service. God spoke to me when I saw the snake, and I then knew its purpose,” he says. When he saw it (the snake) he picked it up and called congregants to eat it.

Reports are that it was alive when two of the teen members of his congregation came up to the front, shaking violently as if possessed.

It is said at first, they appeared hesitant to bite into the snake but with much convincing from Pastor Ratsatsi they bite right into it.

“It is not a snake anymore, it is a chocolate. I am killing the minds of people. It is all about liberating them from a mind-set of fear,” he told.

According to him, he was inspired by Prophet Lesego Daniel who is based in Ga-Rankuwa, north of Pretoria, and Prophet Penuel Mnguni, another pastor who’s been known to “perform miracles” at his church.

Prophet Penuel has often been in trouble with Christians. He once drove a car over a congregant, made people eat snakes and rats and sometimes stripped people naked. He also made them eat their own hair while jumping and stepping on them.

Prophet Penuel found himself in trouble with the Commission for the Promotion and Protection of the Rights of Cultural, Religious and Linguistic Communities (CRL) just a few months ago.

He has been asked to appear before the commission on several occasions, but tells Move! his rights had been abused.

“I did not harm anyone yet you are still seeking me. I am ready to even go to jail for this Gospel.”

The CRL received a complaint about Heaven on Earth Ministries from the public just days after the video went into the public domain. The matter will be discussed once new commissioner, Professor Luka Mosoma starts work this month.

The commission has been kept busy by churches for most of the year. From the fake resurrection at Alleluia International Ministries to pastors making congregants drink petrol, there’s been a rise in fake pastors.