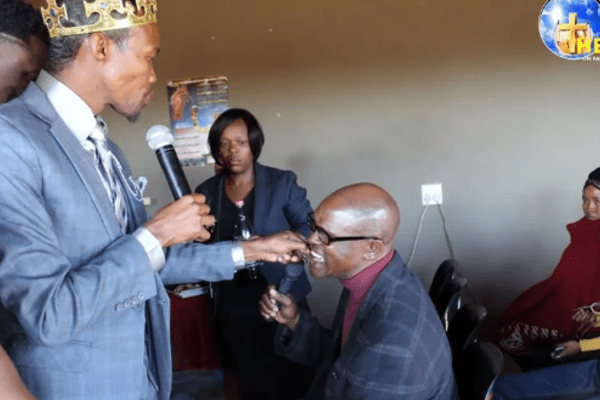 PROUDLY HE holds up the carcass of a dead, bleeding dog.

Soon it will be fried and fed to the congregation.

“THIS USED TO BE DOG MEAT, NOW IT IS THE BODY OF CHRIST!” HE PROCLAIMS.

The centre’s Facebook page displays gruesome pictures of a slaughtered and skinned dog. Then the congregants are shown eating the meat.

On the Facebook page, Pastor Peter wrote: “When you are the Son of God you take and eat. Nothing can kill you and you can eat everything. The spirit of God will minister. Don’t find yourself being deceived by the devil.”

“Yes, it is dog meat. No one died. In fact, they all received healing,” he boasted.

He said they were celebrating their one year anniversary. The cooked meat is seen next to sparkling wine and grape juice and cake in other pictures.

Pastor said his mentors were Pastor Penuel Mguni, known as the snake pastor, and Lesego Daniel, or Pastor Daniel, who gave his congregants petrol to drink.

When asked where he found the dog he didn’t answer. He said he had to attend to a sermon.

“I need to start my sermon. Call me tomorrow,” he said.

SPCA Inspector Meshack Matlou said they were not worried about what the church members were fed, but they were concerned about how the dog was killed.

He said the dog must have died in a cruel way.

“We will assist SPCA members in Mahikeng to find out how the dog died,” he said. “If we find that the dog was killed in a cruel manner we will take action.”

The CRL Rights Commission’s Mpiyakhe Mkholo said the matter was reported to them on Friday.

“The new commissioner assigned by the president will start on Monday and the issue will be discussed and investigated.” Bishop Azor John said on Facebook: “Please check your Bible to see what it says about dogs. They are not holy food and can’t be used for the body of Christ. If I were you I would delete this.”
Papzen Qhinas said: “Then it is easy for him to eat human beings.”
Mary-Jane Alison wrote : “This is not okay. God and religion are about love, peace and compassion and respecting all creation. To treat a living animal this way – to hurt and kill and create suffering – is evil.”