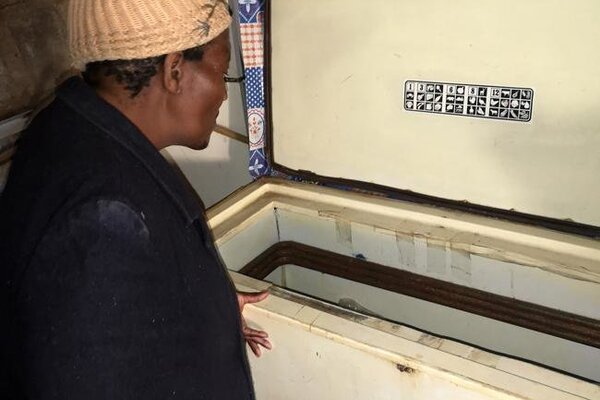 Last Wednesday the 23-year-old from Thabong, near Welkom in the Free State, was helping out in the church yard when her 18-month-old son Botshelo went missing.

She reported her son missing to police and searched for him the whole night.

Botshelo’s body was found the next day inside a chest freezer on the premises of the Twelve Apostolic Church, where Nthabiseng had been working the previous day.

The family suspect foul play. They said the baby wasn’t big enough to get into the fridge by himself.

Botshelo’s distraught gogo, Mamorena Letsholo (51) from Orange Grove in Thabong, told Daily Sun her daughter was helping the pastor with stocktaking at her shop, which shares the yard with the church.

“Nthabiseng always takes her son with her. I was hurt when I heard the body was found inside the fridge. I hope the murderer will be caught,” said Mamorena. Nthabiseng said her son was too small to climb into the freezer.

“My son had blood coming out of his nose.” Shop owner and church pastor Matseleng Koloane (60) said she was saddened by the baby’s death.

“The fridge isn’t working. We keep things like empty bottles and electric cords inside it,” she said. Captain Malebo Khosana urged the community not to take the law into their hands.

Khosana told Daily Sun Botshelo’s body was found last Thursday at 8.30am by a neighbour who was helping with the search. An inquest docket was opened.