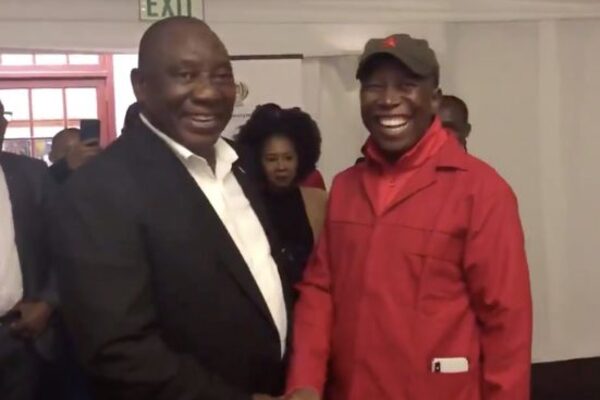 ANC treasurer-general Paul Mashatile has added a hand to several hands that are pushing the drowning EFF leader Julius Malema and his red brigade deeper into the red sea of legal woes.

This comes after Mashatile filed R2m in lawsuits against Malema, the EFF and EFF Gauteng leader Mandisa Mashego for defamation of character after calling him a thief, among other names.

According to papers filed by Mashatile’s lawyers, Mncendisi Ndlovu & Sedumedi Attorneys, at the high court in Joburg this week, the former ANC Gauteng chair was defamed by Malema and Mashego on two occasions.

He said during the course of his address, Malema said R1.6bn that had been allocated to the Alexandra Renewal Project (ARP) had been stolen and that Mashatile, Gauteng premier David Makhura and Gauteng MEC for human settlements Uhuru Moiloa knew where the stolen money had gone and must pay it back.

Mashatile also said Malema had charged that if it were within the powers of the EFF, they would send him to jail.

“The plaintiff, among others, deserved to be in Sun City prison for eating Alexandra money. The aforesaid statements are per se defamatory of the plaintiff and or carry the sting that the plaintiff participated in the theft of R1.6bn meant for the Alexandra Renewal Project, is corrupt, is a criminal who ought to be in prison and or is unethical and immoral,” read the papers.

Mashatile said Malema made these statements unlawfully with the intention to injure his reputation and defame him.

Mashatile filed the second suit against Mashego and the EFF.

He said Mashego, who spoke in isiZulu, had also defamed him during an interview on a popular TV news channel in Alexandra on May 31.

According to the papers, Mashego said: “After looting the money of the Alexandra Renewal Project here since 1998 with his thug boss Paul Mashatile and his brother Mike Maile, the same child of Paul Mashatile who breastfeeds from Paul Mashatile, Lebogang Maile, is now doing what Paul, his father, did after they finished looting the billions now.”

Mashatile said Mashego’s statements, which were broadcast by the channel, were defamatory as they were understood to mean that he had participated in the theft of the billions meant for the ARP.

He said they also meant he was corrupt, unethical and immoral.

Over and above the monetary demands, Mashatile is demanding unconditional apologies from both politicians.

Malema said he was unable to comment as he had not received the summons.

Mashatile confirmed that he had filed papers against Malema, Mashego and the EFF and was awaiting his lawyers to advise him on whether the red berets will oppose the application or not.

Mashego could not be reached for comment by the time of going to print.