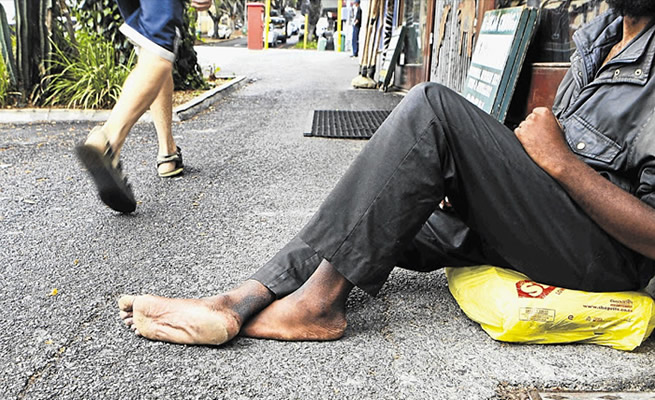 Police have launched a manhunt for suspects after a fifth homeless man was found dead in Pretoria.

A high-level team has been set up to investigate the deaths.

Police are remaining mum on whether or not this is the work of a serial killer but with five bodies of middle-aged men murdered in their sleep, the killings have left the capital city’s homeless community concerned about where they will sleep at night and if they will be safe.

A homeless man has described how he discovered the body of a man he once shared a bed with at Magnolia Park.

“He had deep gashes on his face, also stab wounds to his chest and he was stabbed all over,” said the 28-year-old.

Three bodies were discovered in that park 2 weeks ago.

The fourth and fifth were found on Tuesday and Wednesday.

The Tshwane Leadership Foundation in Pretoria, which tackles homelessness among other issues, says it takes a certain personality to commit such acts.

“It’s not really surprising that in society we see these things because some get a kick out to violently attack people that are much less powerful than them, this is a societal issue there’s a policing of homeless of where to be and not to be but this is extreme example of people disregarding their humanity,” said Wayne Renkin from the Tshwane Leadership Foundation.

A task team of forensic specialists and crime intelligence officers has been deployed to crack the case.

While the men are yet to be identified, the homeless have been urged to be vigilant and sleep in groups.

Eyewitness News spoke to a few homeless people in Muckleneuk, one of them was Julian Reneke who was situated not too far from where the latest victim was found.

He said: “I fear for my life like I said, you don’t know who’s next and what’s going to happen. So, you live every second of the day looking around the corner.”

Nkanyiso Luthulu, who hails from Durban and lived on the streets Pretoria, said he didn’t understand why anyone would target homeless people.

“I don’t know who murders people, especially good people like this. I believe homeless people are good because they take nothing from anyone.”

Police are urging anyone with information to come forward.