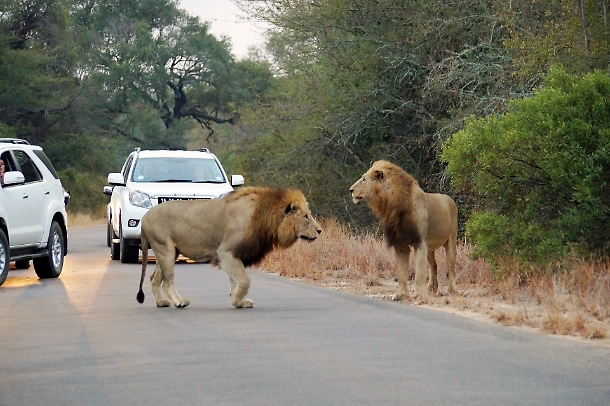 The Department of Economic Development in Limpopo said the lions, which escaped on Friday in Phalaborwa, returned to their usual location.

The department confirmed that the pride was residing at the Foskor mine and did belong to the South African National Parks.

South Africans were being been warned that 14 lions were roaming around Phalaborwa in Limpopo.


There were disagreements between the provincial environment, Tourism Department and SANParks on what to do with the animals.

The department said the lions escaped from the Kruger National Park but SANParks said this could not be proven because there were other parks in the area.

On Thursday, the park’s management met with the department to discuss where the animals could be safely accommodated.

Spokesperson Ike Phaahla said: “They will continuously break out of the park as that’s not their area. It’s always a great risk for the community. The community is advised to be vigilant and to keep a safe distance from them.”

MEC Thabo Mokone said it was normal during dry season that they would move from their usual spot in search for water and prey along the river.

Mokone visited the Phalaborwa area to calm residents after 14 lions were reported missing.

He said residents told him that they were being harassed by the beasts and asked him to move them elsewhere.

But Mokone said the animals were part of the community too.

“We have taken the decision that we are not going to move them. These animals are a part of this area and have been staying here for a long time.”

A security guard died on Saturday after being trampled by an elephant in the area where the 14 lions were presumed to have escaped from. The MEC said an investigation was under way to get to the bottom of the matter.

Meanwhile, mining company Foskor said it was not clear how the elephant that trampled on a security guard to death ended up in their premises.

The company confirmed the death of the guard on Saturday.

Foskor, which is situated next to the Kruger National Park, said it believed that the animal escaped and somehow managed to get onto their premises.

The body of the officer was found behind a guardroom.

Foskor's industrial relations head Frans Mokhondo said: “We heard the sound of the elephant and summoned for help. We then searched for the now deceased security guard. The deceased worked for a security company which offered services to Foskor.”

Police said the man died on the scene.

Spokesperson Mienkie Ramakgoakgoa said an inquest docket has been opened.

“The South African Police Service in Limpopo is investigating a case of inquest after an incident where a 45-year-old security guard was attacked and killed by an elephant at one of the mines in Phalaborwa. Police investigation is still ongoing.”