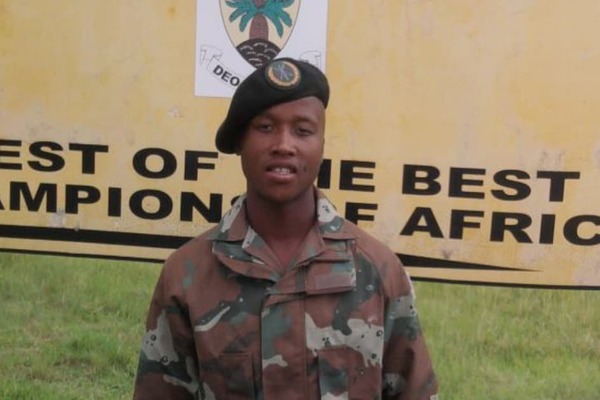 THAPELO Mokgosi, the man who allegedly passed himself off as a soldier, will remain in custody until his next court appearance after a month.

Thapelo appeared in the Pretoria Magistrates Court yesterday on charges of falsely presenting himself as a soldier and illegally possessing a firearm and ammunition.

He was not asked to plead to both charges.

The case was postponed to 5 July, when he is expected to apply for bail.

Dressed in plain clothes, he smiled and had a lengthy chat with his lawyer, Riaan du Plessis.

He seemed not to be bothered by the attention he was getting from curious onlookers.

Thapelo was arrested on 25 May in Thaba Tshwane, an army base in Tshwane.

The 29-year-old from Kagiso, on the West Rand, allegedly wore an SANDF uniform and carried a firearm.

He also allegedly sent relatives and friends pictures of himself in army uniform.

He allegedly even went to his former school, where reportedly issued application forms for army vacancies.

“Other people are being investigated,” he said.

He said army intelligence and the police were investigating the matter.

Mgobozi would not be drawn on details of the investigation.

Meanwhile, a captain in the SANDF has been arrested for allegedly ordering a clerk to clear a suspect into the battalion.

The captain has since appeared in a military court.