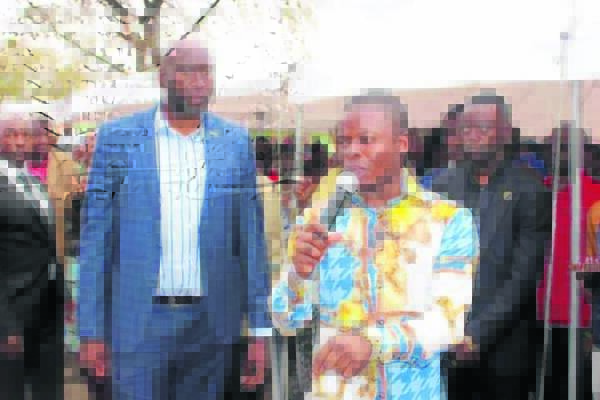 STANDING IN the bright lights with his hands raised in prayer, he is a man of God with many followers.

But perhaps when he is not on stage, Pastor Nicolas lives a double life.

The 45-year-old Pastor Nicolas Mgiba from the Phalaborwa, Limpopo, is the leader of the successful and busy Enlightened Christian Gathering church.

Like the other church leaders who are described as sons, he’s known as a trusted son of Prophet Shepherd Bushiri.

But on Monday Mgiba and two other men, Bento Mendose (44) and Zalcbrel Baloyi (28), found themselves involved with the law when police stopped them as they were driving on the R40 outside Phalaborwa.

They are now behind bars facing charges of attempted murder and conspiracy to commit illegal hunting.

This is not Mgiba’s first brush with the law. He was arrested in 2009 for armed robbery at a PEP store in Acornhoek.

Later in the year he was arrested with his mother for fraud in Tzaneen after they allegedly sold two cars in Mozambique illegally shortly after buying them in Mzansi.

Colonel Moatshe Ngoepe, spokesman for Limpopo police, said their cases were postponed to Wednesday for a formal bail application.

He said they acted based on information from the public that there’s an illegal poaching criminal syndicate in the area.

“Our tactical response team and the farm watch in Hoedspruit followed up on information we received and the bakkie that matched the description of the vehicle we had was spotted on the road,” said Ngoepe.

“The drama unfolded when they were stopped. They shot at the police but were chased and, as a result, one suspect was shot and arrested, along with the other two.”

Ngoepe said during the arrest they recovered a hunting rifle, a silencer, ammunition, a knife, an axe and the bakkie.

Ephraim Nyodo, a spokesman for the church, said: “He was suspended by the directors of the church earlier this year due to internal disciplinary issues.

“His arrest this week, therefore, is solely a matter for him as a person.

“As such, we would like to once again reiterate, reassure and remind the general public that, pending the outcome of the investigations, Mgiba is no longer serving as a pastor in church, nor is he involved in activities of the ministry in any capacity.”