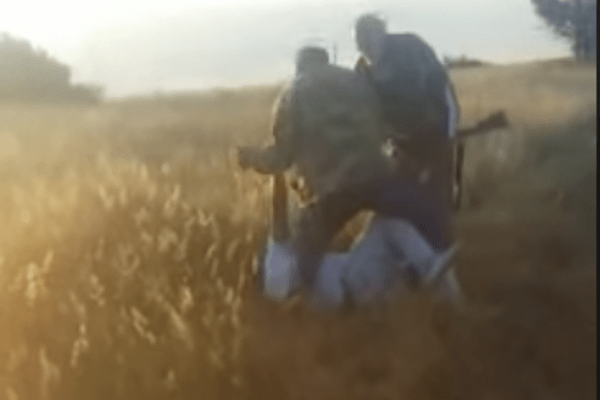 THE NORTH West police have confirmed that they are investigating a case of assault GBH after a mom and son were attacked by two farmers carrying a gun and stick.

The incident reportedly happened in a farm outside Schweizer-Reneke in the North West.

According to the Police the attack happened on Saturday.

Videos doing the rounds on social media have sparked outraged.

The footage shows the woman and the son trying to talk with a white man who is in a white bakkie.

The man speaking in Afrikaans asked the two, how they got inside his farm, while they were busy explaining to the man, the farmer began to swear at them

Speaking in Afrikaans he told them that he is going to the gate and when he comes back, they will be in trouble.

When the mother tried to tell the man that they found the gate opened, the man told them that they are talking S**T and the son retaliated and told the man that he will also S**T himself.

The angry farmer got out of his bakkies and allegedly went to attack the son, but he got more than he bargained for when the son managed to defend himself overpowering the man.

According to a witness the mother and son went to the farm to buy a sheep, one of the farmer workers opened the gate for them but the farm owner was not pleased to see them there.

Police spokesman, Brigadier Sabata Mokgwabone, said they can confirm that a case of assault with intent to do Grievous Bodily Harm (GBH) has been opened subsequent to the alleged incident.

“Investigation is still underway, and no one has been arrested at this stage,” he said.