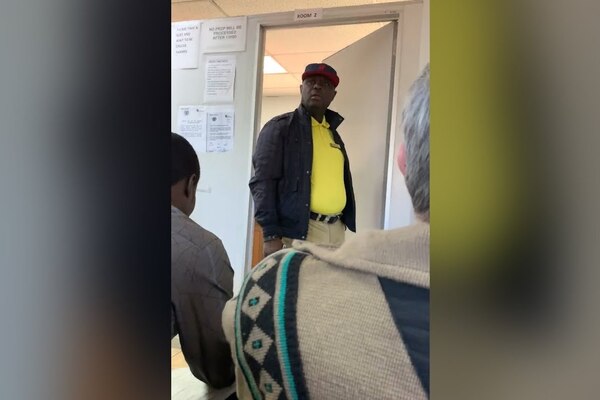 A department official has gone viral on social media, angering citizens with his allegedly racist rant against clients. During a clip, he can be heard saying that white people make him 'sick' while confronting a young man.

An official from a Bedfordview licensing department has Mzansi riled after he went on an allegedly racist rant aimed at a client. The City of Ekurhuleni has released a statement confirming they are aware of the matter, saying it has been taken up for investigation. Gavin Sharples, who can be seen in the clip intervening in the confrontation, says he had gone to the department to renew his driver's licence. Sharples described witnessing the official 'berating, insulting and humiliating' a young man who had come for his licence.

According to TimesLIVE, the official in question had begun yelling at the young man, claiming to be doing him a 'favour' by speaking in English. Sharples claims that the official was heard saying 'you white people need to learn your own language': "He then called him stupid, at which time I stood up and asked (the official) to please put some love in his heart and show the young man a little bit of respect. (The official) then turned his racist rant towards me.

He told me directly that he had no love in his heart and began to shout at me. At this point a recording was made of his conduct." Sharples also had a few words for the official's supervisor, who was seated just behind him during his tirade. He said it had been impossible for the supervisor to have not heard the entire confrontation, yet he had elected to do nothing. When Sharples entered the office to lay a complaint with the supervisor, the offending official could be heard saying:

Sharples says that the official's conduct was not only 'criminal', but 'unconstitutional', revealing that he has opened a case of crimen injuria with police, and lodged a complaint with the SA Human Rights Commission and the Equality Court.

A licensing department official who came under fire for alleged aggression and racist utterances against a client in Bedfordview last month, has been fired with immediate effect, the City of Ekurhuleni confirmed on Tuesday.

The municipality said it "acted swiftly to institute disciplinary processes" following "egregious racist remarks" and aggression against a client.

"The official failed to make a substantive written submission on why his contract should not be terminated. Subsequently, the city had no option but to dismiss the employee with immediate effect," said spokesperson Themba Gabede.

He said the city viewed the conduct as "constituting exceptional circumstances" as envisaged in the Labour Relations Act, whereby pre-dismissal procedures may be dispensed with.

A client who witnessed and intervened during the incident, Gavin Sharples, earlier said he had been at the licensing department to renew his driver's licence when he witnessed an official "berating, insulting and humiliating" a young man who was there for his learner's or driver's licence. He lodged a complaint about the way the young man was treated.