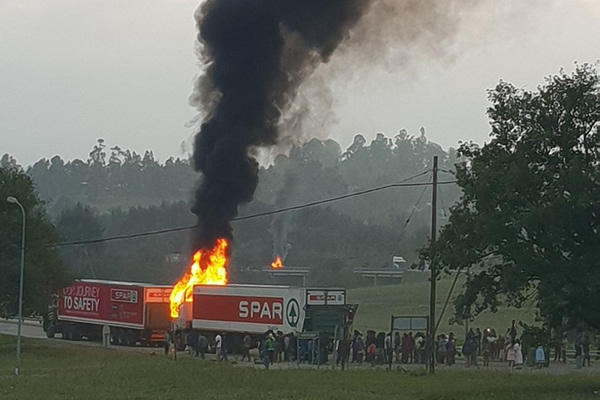 Operations resumed at the N3 Toll Plaza near Mooi River in KwaZulu-Natal on Monday, the N3 Toll Concession (N3TC) said.

"Almost 24 hours after protest action lead to the burning of trucks and the subsequent closure of the N3 Toll Route near Mooi River in KwaZulu-Natal, N3 Toll Concession (N3TC) can now resume operations at its Mooi Plaza in both the north- and southbound directions," spokesperson Anita Heyl said.

"Temporary repairs have been done and the diversion of traffic off the N3 Toll Route is no longer necessary. The N3 Route is now open to traffic."

The N3TC appealed to road users planning to use the N3 Toll Route to avoid travelling at night and to obtain verified real-time traffic information from the 24-hour N3 Route Helpline.

Earlier on Monday, recovery and clean-up operations were underway on the N3 stretch in the Mooi River area after 32 trucks were torched and others looted.

One truck was also torched along the R103.

KZN police confirmed that a total of 54 people were arrested and charged with public violence. They were set to appear at the Mooi River Magistrate's Court on Monday.

Arrive Alive South Africa released a statement on its website on Sunday evening cautioning road users travelling on the N3 “over the next few days” to avoid doing so at night.

The violence allegedly started on Sunday when foreign truck drivers were accused of taking jobs from locals.

Last month, hundreds of motorists were delayed over the Easter long weekend when looting took place along the same route.

The Mooi River N3 toll plaza is one of the busiest in the country, linking KwaZulu-Natal’s two major seaports with most of the hinterland such as the country’s economic hub of Gauteng and SADC countries.