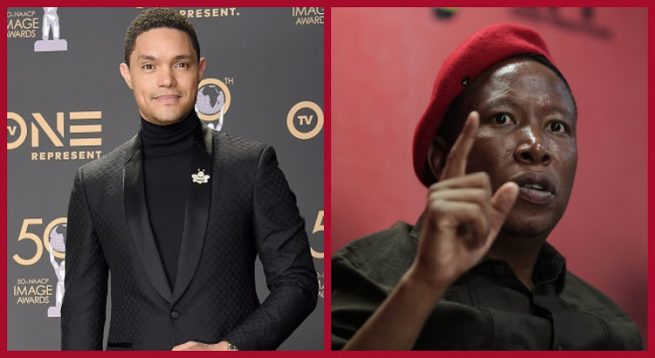 EFF leader, Julius Malema, has urged South Africans to continue to support comedian Trevor Noah despite his critisim jokes about the politician.

Noah compared Malema to American president, Donald Trump, in a clip on The Daily Show, which went viral. The clip featured Malema saying he did not know the future and was not calling for the slaughter of white people. He said “At least not for now,” and the EFF leader continued to talk about the genocide like any other topic.

According to The Citizen, Malema was highly criticised and accused of encouraging the white genocide narrative that most Americans believed about South Africa. Country duty leaders, Tumi Sole was adamant that this is not true. He said: “Julius is Donald Trump of Mzansi? Yeah neh! Call it what you want but Trevor perpetuates the Afriforum fear-mongering that there’s white genocide in South Africa. The issue is the comparison in a non-existent genocide. I’m talking about his satire, he can do that. But akere we catching feelings.”

The Daily Show later removed the video from its social media platforms. Malema said he would still support Noah, despite the comments.

“We love Trevor Noah. He is our brother and he can say whatever he wants to say about me or the EFF. We wish him well and hope his joke was made genuinely. South Africans should continue to support him. Despite all the nonsense he said, he remains one of us. People say things to keep their jobs. We had that during the apartheid era. It’s not a new thing,” said Malema.

Trevor Noah is considered one of the funniest men in the entertainment business and he's now getting credit for his hard work as a comedian. The South African comedian is one of the Best Host nominees in the MTV Awards for his show, The Daily Show.