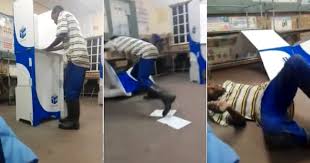 A video has been shared on social media that had many South Africans in stitches. The video shows a drunk man attempting to cast his vote. While some people felt the man was shameful, others applauded him for trying to vote at all.

The 2019 Elections are now over and done with, but it didn't go by without a few incidents. Some of these incidents were less serious than others, and some were found really funny by South Africans.

One such funny incident is shown on a video shared on social media. In it, a man is seen trying his hardest to put an 'X' on a ballot paper, but he's so drunk, he just can't stay standing long enough to do so.

The man is seen swaying severely before completely losing his balance and toppling over the voting booth, taking it to the ground.

One has to wonder if this man’s vote has been counted? 🤣🤣🤣 pic.twitter.com/pkqOwJxWVZ

A huge number of registered voters didn't show up to vote, while many South Africans didn't even want to register in the first place.

At least he turned up to vote.

Even with his state of mind, he came to vote. That's all that matters. Unlike those lazy 9 million nton ntons

I will be so disappointed if it (his vote) was not counted…. some useless citizen didn't even bother going to vote. I am actually proud of this champ