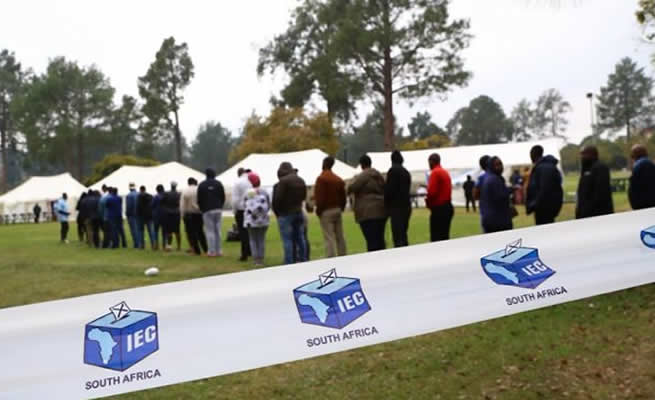 Numerous smaller political parties at the results centre in Pretoria are feeling disgruntled amid evidence from the IEC’s voter count that only eight parties have so far received more than half a percent of the vote.

A record 48 parties appeared on the ballot this year, and most of those who have no hope of now of winning a seat in the National Assembly or a provincial legislature gathered at the results centre earlier today to express their disdain about the results and the electoral process.

They even want the whole counting process to stop and elections to be held again. They have vowed to head to court to achieve this and appear to be led by the ATM’s Mzwanele Manyi.

The DA’s Mmusi Maimane has, however, called on the country to give the IEC’s audit process a chance before making a determination on the integrity of the elections.

The smaller parties have also slammed the media for allegedly not giving them as much exposure as the bigger parties, and even for calling them “smaller parties”.

Black First Land First (BLF), the African Content Movement (ACM), the Socialist Revolutionary Workers’ Party (SRWP), the Land Party, the APC, Eco-Forum, Woman Forward, Patriotic Alliance, the African Transformation Movement (which has won at least one seat) and many others said they would together fight their battle in court, as they claimed to have evidence that they had been discriminated against and have refused to accept the outcome of this election.

The BLF’s deputy leader, Zanele Lwana, alleged that the party’s poor performance was somehow linked to a conspiracy involving “white monopoly capital” and the bigger parties.

#SAElections2019 BLF spokesperson Zanele Lwana said there is a political agenda to alienate parties that are aligned to the radical economic transformation agenda @AfriNewsAgency pic.twitter.com/xDNBYCUuLd

The parties have expressed amazement that the Freedom Front Plus could have done as well as it has while new black parties have not.

“We are not 100% satisfied with the result,” they told journalists.

The group of 30 parties wants South Africa to treat allegations against the IEC that there were “massive flaws” in this election seriously, and agree with them that the 2019 national and provincial elections were neither free nor fair.

They warned the EFF not to act like it was better than them.

They reportedly came to their decision to be dissatisfied together during a meeting behind closed doors to discuss the irregularities that were reported on election day.

This development was contrary to a number of statements made by the parties in interviews with The Citizen this afternoon.

Take all the small parties to the evil forest, that ballot paper was unnecessarily long. pic.twitter.com/MabADNq1NY

Take all the small parties to the evil forest, that ballot paper was unnecessarily long. pic.twitter.com/MabADNq1NY