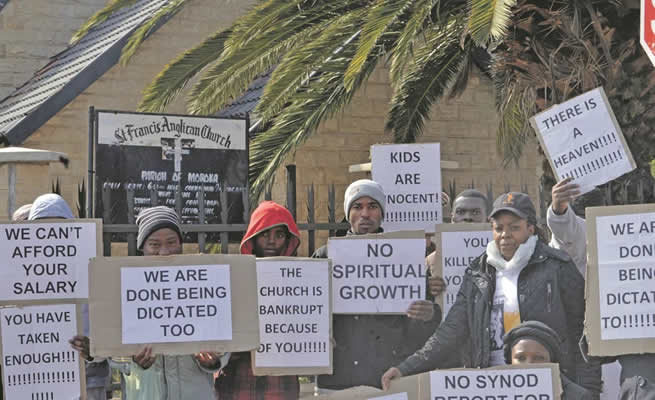 Congregants at Christ the King Anglican Church in Tembisa locked the church’s main entrance yesterday demanding that their priest vacate his position.

When Father Mpho Masekela arrived at the church for the service early yesterday he was greeted by posters placed on the fence calling for him to step down. When Sowetan visited the church yesterday, cars were parked outside the church and children were running around the premises.

The angry congregants stood outside in their traditional black and white uniform. Some were tired and simply laid down on the grass. “We have a problem with Father. He has been here for too long. He arrived in 2003. He was supposed to leave us after five years. That is what happens to all priests. Now, he has become very arrogant even when he preaches. He talks to us as if we are little children. We have endured a lot under his arrogance,” said one of the congregants.

She added: “He has become too arrogant and it is unbearable. He has become reckless. We locked the church. When he arrived he saw our posters and he left.” But the congregants could not give direct examples of his arrogance and recklessness.

Inside the church, a meeting was taking place to discuss the problem that the saints were facing on the day. Church wardens were able to get into the church through the mission house and held a meeting.

When approached for comment, one of the leaders declined to comment, saying the meeting was still taking place and would only be able to speak afterwards.

One young person came to the Sowetan to inform the team that there was no one who could speak to the newspaper.

He later called and promised to give the details of a person with authority to speak, but that did not materialise. Sowetan contacted Masekela for comment and he declined to speak.

“I am not the church’s spokesperson, I cannot comment on what you are talking about,” he said.

Efforts to get comment from the church also did not yield any positive results.

The bishop responsible for the diocese also said that he was not aware of the incident, therefore, he could not comment.