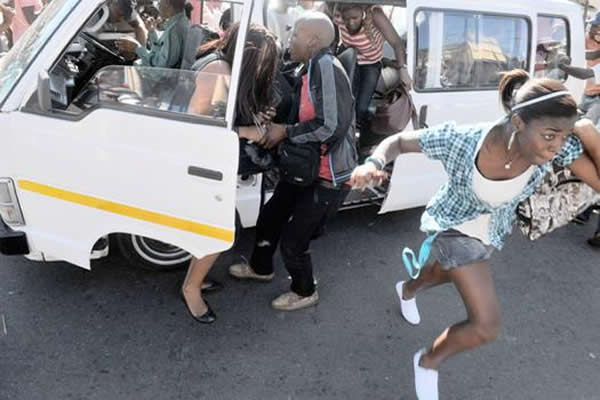 At least one person was killed and three more seriously injured as taxi violence continues in KwaZulu-Natal.

Police spokesperson Colonel Thembeka Mbhele said in the latest incident, a group of heavily armed gunmen, travelling in a Toyota Quantum minibus taxi, stormed the taxi rank in Brook Street, Durban on Friday at around 17:00.

"They fired multiple gunshots and sped off. Three people were seriously injured and taken to hospital for medical attention and a 56-year-old later passed away."

Mbhele said the men had then fled towards Pinetown. She said a police officer from the Pinetown Task Team spotted their vehicle in Chelsea Avenue, New Germany and gave chase.

"The suspects opened fire at him and he retaliated," she said.

Mbhele said no one had been injured in the exchange of gunfire.

She said the men had then abandoned their vehicle and ran into a building in Scott Road, Pinetown.

"The National Intervention Unit were called in and a total of 16 suspects were arrested and a total of 17 firearms were seized, which included nine rifles, a shotgun and seven pistols."

Mbhele said the men would be charged for murder and attempted murder, which would include the shooting at the police officer in Pinetown.

"They will also be charged for illegal possession of firearms," she said.

Mbhele said the firearms would be subjected to ballistic testing to ascertain if they were used in any other pending cases.

The KwaZulu-Natal acting Commissioner, Major General Bheki Langa, commended the swift response by police, which led to the arrest of the men and the recovery of firearms.

"In this province, we will not tolerate any violence especially relating to the taxi industry as members of the community are normally [caught up] during the exchange of gunfire. We work diligently to ensure that the perpetrators are brought to book," he said.

Mbhele said the men were expected to appear in court soon, and the case would be assigned to the Provincial Task Team for further investigation.