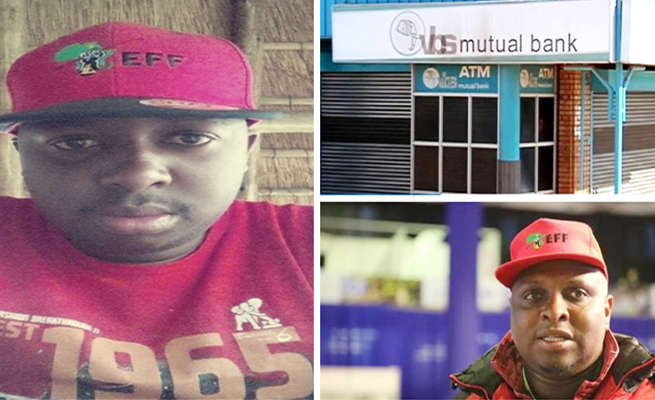 The liquidators of VBS Mutual Bank are suing Brian Shivambu‚ the brother of EFF deputy president Floyd Shivambu, and his company, Sgameka Projects, for R4.2m in unpaid loans and mortgages.

In papers before the high court in Johannesburg, Anoosh Rooplal, of the accounting and advisory firm SizweNtsalubaGobodo Grant Thornton, asks for Sgameka Projects to be placed under liquidation over its alleged breach of a R4.2m contract.

Rooplal told the Sunday Times two applications had been made — one against Shivambu and the other against his company — to recoup some of the millions lost by VBS.


“We requested the sheriff of the court to serve Shivambu immediately. He has five court days to respond as to whether he will accept the application or oppose it. Then he has another 15 days to file an opposing affidavit,” he said.

The R4.2m includes R2.7m which VBS claims Shivambu owes the bank in unpaid loans, plus interest.

“The R2.7m we are suing Shivambu for is based on a surety he signed on behalf of his company,” Rooplal said, adding that Sgameka Projects owed VBS an additional R1.5m arising from a mortgage credit agreement.

Daily Maverick last year reported that Shivambu used a R1.46m loan to Sgameka to buy a house in Witpoortjie, on Gauteng’s West Rand, for his parents. The parents reportedly moved into the house in October 2017 and are said to have vacated it last November.

Late last year Terry Motau SC, of Werksmans Attorneys, revealed details of how R1.9bn was stolen from VBS Mutual Bank. The law firm was appointed by the Reserve Bank to investigate claims of largescale looting from VBS. The report implicated 53 people, including VBS chair Tshifhiwa Matodzi.

Motau called for arrests to be made, the tax authorities to act and for VBS to be wound up. Shivambu was among those implicated, as was former president Jacob Zuma and the Passenger Rail Agency of SA. According to Motau’s report, Shivambu received R16.1m in “gratuitous payments” from VBS Mutual Bank.

Rooplal says in the court documents that VBS paid the money to Sgameka Projects either through cash payments or by paying suppliers of office equipment. He says Sgameka Projects agreed to repay the loan in 24 monthly instalments of just over R190,000.

He says Sgameka Projects failed to comply with the terms of the loan and mortgage credit agreements.

“Essentially, Sgameka Projects is deemed to be factually insolvent on the basis that it has failed to make payment of amounts demanded by VBS,” he says in the application.

Rooplal says in the court papers that in late February, the bank received a letter from Shivambu’s lawyers making an offer to repay the loan in monthly instalments of R5,000. Asked why the liquidators were claiming only R4.2m and not R16.1m, Rooplal told the Sunday Times: “The application we are making is for a mortgage and loan specifically that was not serviced with VBS.”

Efforts to get comments from Shivambu were unsuccessful. When contacted by the Sunday Times on Friday, he asked that questions be sent via SMS. By the time of going to print he had not responded.

When the VBS report was released last October, Shivambu threatened to sue the Reserve Bank, claiming he had never been contacted by investigators to explain his role.

“I intend to legally pursue the owners of the VBS report for defamation of my character and that of my company as well as for the strain this report has caused to my family‚” he said at the time.

He also denied that Sgameka Projects had any relationship with VBS, or had received any cash from the bank. Rooplal has asked that the costs of the application be paid by Sgameka.