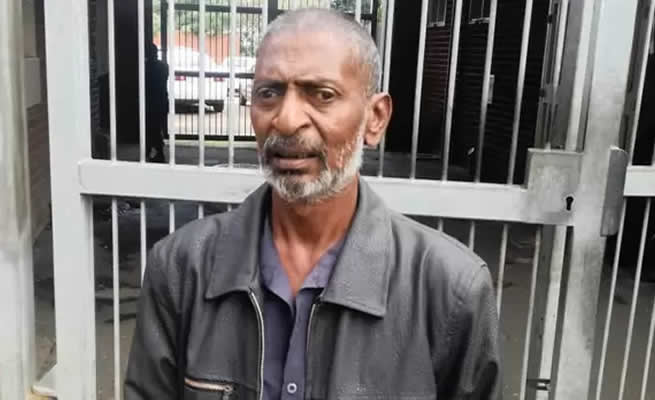 A Phoenix, Durban man, unable to care alone for his “large” bedridden wife, decided the only way out was to kill her.

First, he attempted to suffocate her with a pillow. When that failed, he fetched a large kitchen knife and slit her throat.

Dickson Naidoo, 64, then went to the Phoenix police station where he allegedly confessed to killing his wife Dhunalutchmee, 69. He appeared in the Verulam Magistrate’s Court today on a charge of murder.

A source close to the investigation alleged Naidoo told them that he could not take care of his wife any longer.

“He described her as a large woman and said he had been struggling to pick her up or give her bath. He said he would bath and feed her but with his frail state, he could no longer perform the duties. He said he had no additional support and was left to care for her on his own. He was fed up,” the source said.

She suffered from an unknown disease which had left her bedridden. The couple was renting a flat in Landbury Place, Eastbury, north-east of Durban. Naidoo allegedly told police that his son had died and their daughter was on the run from police for theft.

“He claimed the only way to end his pain and suffering was to kill his wife,” said the source.

Neighbours found the dead woman lying on her bed, covered in blood. Last week, Naidoo had sought help from his neighbour Yvonne Chetty to try to place his wife in frail care.

“They were both lovely people but you could see taking care of Dhunalutchmee was taking its toll on him. He wanted her to go for treatment to hospital but she refused. She only wanted him to care for her,” said Chetty.

She said Naidoo had asked her to help him fill out forms to place Dhunalutchmee in a home, but because she did not have any medical records confirming her condition, the home rejected the application.

“He did everything for her from cooking and cleaning to feeding and bathing her. He sought help from his family but nobody could assist him. On some days he would just come to our home and cry because he felt abandoned and helpless.”

Shortly after the murder, Chetty said Naidoo went to her home.

“He was supposed to take her to the hospital and when I questioned him he said she was already dead. He told me he was going to the Phoenix Plaza and closed my gate. As he walked up my stairs to the road I heard him tell someone on the phone he had slit her throat,” she claimed.

Chetty said she screamed for her neighbour for help. “The neighbour went to the house and pulled back a curtain via an open window only to find Dhunalutchmee was dead. She had a deep wound across her neck and there was blood everywhere.”

Chetty said she was in shock.

“I’ve known him for so many years. He really loved her and she loved him. They only had each other but he could not cope with the stress.”

Chetty said his son had died of cancer and the whereabouts of his daughter was not known. Their families declined to comment.

Police spokesperson Nqobile Gwala said a case of murder is being investigated.