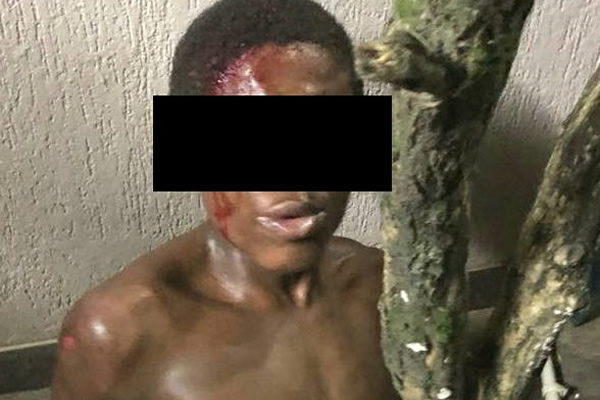 A house breaking suspect was stripped naked, leaving his balls and anaconda exposed and dangling like a bus wiper then tied to a tree before getting thoroughly beaten up by members of the community as instant justice for his crime.

The pictured 20-year-old suspect who is from Zimbabwe was arrested by members of Reaction Unit South Africa after he allegedly broke into a home in the Chubbies Garage area off Inanda Road in Verulam, eThekwini in KwaZulu Natal Province on Wednesday evening.

RUSA received a call for assistance after a homeowner found that his residence had been broken into.

"Upon arrival Reaction Officers found that forced entry was gained though the roof. Several household items including a DVD Player, kettle and a gold ring were among the stolen items.

"Officers interviewed residents in the area who confirmed that the suspect was seen selling the items to an individual in the area. RUSA Members approached the man who admitted to purchasing the stolen goods which he handed back to the homeowner. While being interviewed he also confirmed that the suspect was known to him and was most likely at a nearby tuck shop," said RUSA spokesman Pren Balram.

Reaction Officers proceeded to the tuck shop and located the suspect. Upon searching him a gold ring belonging to the homeowner was found inside a packet of cigarettes.

A large crowd gathered at the scene and began assaulting the suspect whom they claimed was a menace and responsible for the high crime rate in the area.

The suspect confirmed that he is a drug user and the proceeds from his crimes are used to support his drug habit.