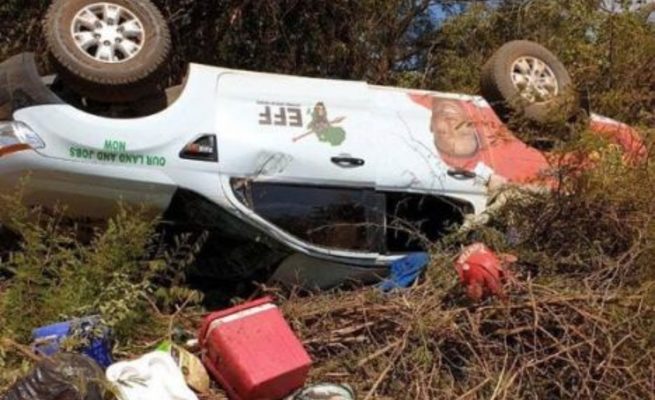 But social media has focused only on the white farmer who came to help.

“The car was travelling from Moretele to an EFF rally. It was around noon on Sunday. The car lost control. The first car was in front. The second car that was coming from the back lost control and overturned. Nine people were involved, one was seriously injured and another passed away,” Babuile said.

He added that he arrived at the accident half an hour later, waiting for the ambulance to arrive and assisting those injured.

The incident has been doing the rounds on social media, with posts highlighting the fact that white farmers are believed to have helped after the crash.

“It is true that there was one white farmer who came to the scene immediately and we really want to thank him,” Babuile said.

While one social media post highlighted this in a positive way, writing “we’re better together”, some had a less generous interpretation, with one of the EFF’s detractors tweeting that if white farmers helped it “can hurt the EFF campaign of hate against white people” and another tweeting that the incident shows South Africa to be a strange place. “Rescuing the people campaigning to eradicate you one day, arming yourself to defend yourself from their attack the next,” he tweeted.

However, Babuile said that while he appreciates the help of the farmer who arrived at the scene, he feels that some are using the incident to unfairly politicise what took place.

“They are trying to politicise an accident, they don’t have morals. How do you politicise the death of a person?” he said.

#EFF campaign vehicle in an accident on a dirt road. The farmers in the area responded to assist the injured fighters. #SouthAfrica is just plain weirdo. Rescuing the people campaigning to erradicate you one day arming yourself to defend yourself from their attack the next. 🤣🤦‍♂️ pic.twitter.com/Kp9pxPRbM2