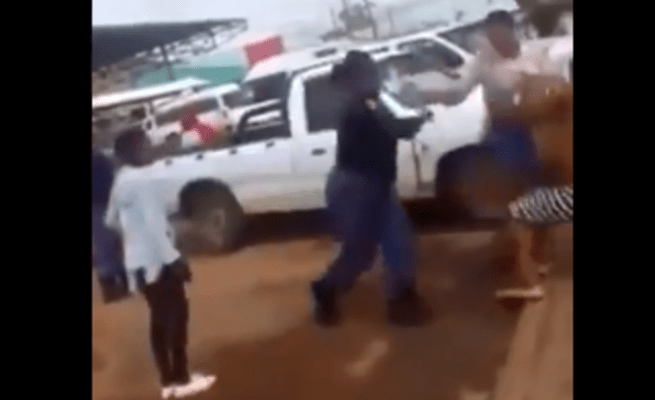 A video of a female cop assaulting a woman is circulating on social media.

In the video, two female cops appear to be having an argument with with a civilian.

It is not clear what the argument was all about but soon the female cops starts pushing the woman who falls to the ground.

The officer can be seen repeatedly kicking the woman.

The video was posted by Twitter user Yusuf Abramjee, who also wrote that "officers can't be law unto themselves".

Via FB: This happened in Tsolo, Eastern Cape. @SAPoliceService officers can’t be a law unto themselves! pic.twitter.com/k1KD9r10h3

Other Twitter users were also not impressed with the officer's actions.

How can you do such thing while wearing Uniform!!! 😠😠😠 unprofessional Officer with Only Grade 12 certificate 😩😩

I know most of officers doing such things are those with Grade 12 only 😕. .

She must be sent home packing she doesn't deserve to be an officer.

@SAPoliceService, I always say those people get hired because they are jobless and hungry. They do not have a passion for this. Look at those with ranks or whatever they call it, those who have studied and who knows and understands the law. They will never do this.