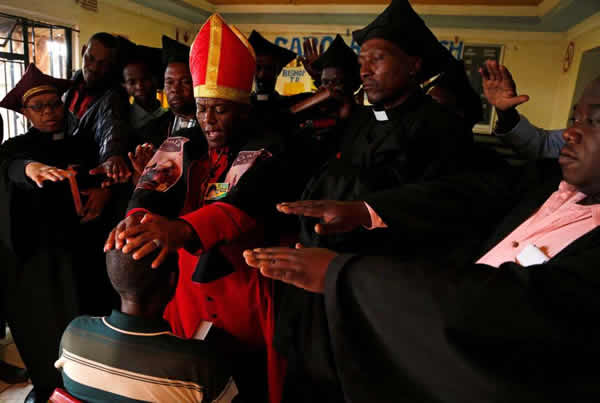 HE PREACHES the word of God. But his wisdom doesn’t just come from the Bible.

“A man with no money has a sleepy penis!” says the bishop. And the men in the Church of Warriors for Christ, in Emalahleni, Mpumalanga, nod their heads and laugh in agreement.

In a video taken from one of his Sunday sermons, the pastor can be heard saying that once a man has money in his pockets, the manhood rises. “Indoda mayinemali umpipi uyavuka,” he says to applause and laughter.

The bishop emphasised the points he made in the video. He warned that an awakened penis can sometimes also do bad things.

“Some men, when they have money, the penis wakes up and they want to go outside their homes. And that wealth will only be temporary. If you’re a man and you have accumulated wealth, your organ should rise only for your wife,” he said.

He said men with no money had humble 'anacondas'.

“And women with more money than a man can also destroy a manhood. Money wakes a penis but for a woman it raises control,” she said.

He said men should have priorities. “Know your vision. That way, you will have money and you will know what to do with it. You won’t spend it on girls. You will build a legacy for your children,” he said.

He said when a man doesn’t have money he becomes stressed. “But the minute he has money, that penis will rise only for his wife,” he said.

The bishop said that in his services, he talks about harsh truths and outlines ways of maintaining a healthy marriage. His seminars keep both men and women wide awake with laughter and wonder.

“My aim is to revive marriages and fight against divorce in communities,” he said.

He said it wasn’t his goal to make people laugh, but what he wanted was to touch on issues that affected them so they could get help.

“My services are attended by close to a thousand couples. They are free of charge,” he said.