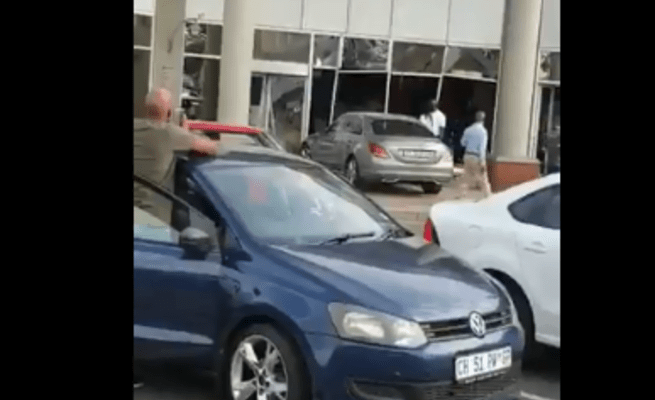 Standard Bank has confirmed none of their staff members of clients were injured when a woman drove into the front of one of its branches on Friday.

The Boksburg Advertiser reported that the motorist had driven her car “a number of times” into the bank’s front entrance at the K90 Centre, causing about R100 000 in damage.

The publication spoke to a security guard, who said that the customer, who was “very, very angry” had left the bank, got into her Mercedes Benz and drove “through the windows”, knocking it repeatedly until they were “all down”.

“According to what she said, she was shouting and saying, ‘if you don’t give me my money, then I will go inside the bank with this car,” he told the reporter.

In a video shared on Twitter by anti-crime activist Yusuf Abramjee, a sliver luxury car is seen on the pavement in front of the branch’s damaged exterior. “A lady drove her car into a @StandardBankZA in Boksburg after she waited for hours for service! #MovingForward,” the caption to the video reads.

Standard Bank spokesperson Ross Linstroom told News24 that counselling had been offered to those “impacted by this unfortunate event”.

"We can also confirm that the client was served in a professional manner and in line with client-service procedures. The query was of a complex nature. This is now a police investigation, and as such we are not in a position to provide further details," he said.

When News24 contacted police on Saturday, it had no record of the incident.