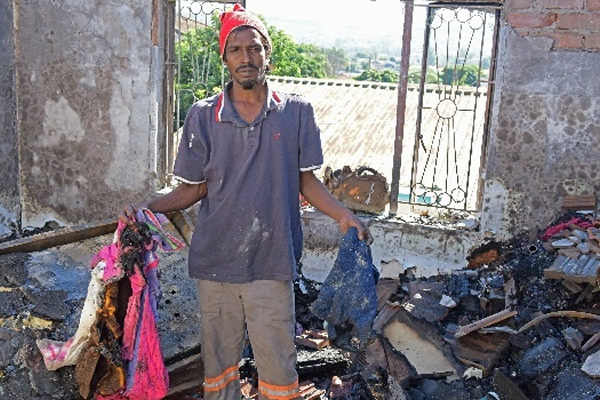 The Northdale teenager who is alleged to have been set alight by her boyfriend had initially not pressed charges because he had allegedly threatened to kill her if she did.

That is according to the 17-year-old’s step-sister, who told The Witness on Tuesday the girl’s family had known of her allegedly violent relationship with the 32-year-old suspect for about two years.

Fifty-four tenants, including 17 children — one as young as three weeks old — were left destitute after the fire gutted most of the large, double-storey house on Lahore Road on Monday morning.

The boyfriend is expected to appear in court on Wednesday.

Msunduzi erected six tents on the property for tenants, and the wider community has rallied around them, donating food and clothing.

Both the teen’s arms, her head and parts of her back are covered in bandages. Her face is severely swollen and much of the skin on her face has peeled off. She is unable to move her body or talk properly as a result of the injuries.

The Witness on Tuesday quoted police saying that after a fight broke out because the girl did not want to clean the boyfriend’s room, he allegedly beat her with an iron pipe, poured petrol on her, and set her alight.

She may only be able to provide a proper statement to police in three days’ time, once she is able to speak properly.

The victim’s step-sister, Happiness Tusi (20), spoke to The Witness. “I was [nearby in] Khan Road and I was told that her house was on fire. I went there and saw it burning. I then went to Willowton to tell her mother about it,” she said.

Tusi said she had visited her step-sister in hospital on Monday afternoon. “She told me her boyfriend said she must change her statement to police or else he will kill her. He said she must tell cops she spilled petrol on herself then lit a cigarette.”

She alleged the boyfriend was “possessive” and would sometimes not allow her to leave the house.

Meanwhile, several organisations have come together to provide aid to the tenants, with councillors and activist groups having worked until the early hours of yesterday morning ensuring they had food and shelter.

Multiple families have had to squeeze inside each tent, but PR councillor Rachel Soobiah said they were looking at the option of housing them in a nearby hall.

A tenant of nine months, Roshina Jaglal, said the second floor was gutted, and there was major water damage in the first floor.

“Everything is gone, and we were all just left with the clothes on our back.”

Tenants said the house was mainly occupied by poor people who paid anywhere between R1 000 and R2 000 per month. They said the house had a high turnover of tenants, and people generally stayed for about six months at a time.

Darryl Govender, a prominent member of the community, said he had been assisting the tenants since Monday.

“Fortunately the community has come to the fore and has donated clothes for children, nappies and have contributed ingredients which a local organisation is cooking and dropping off.”