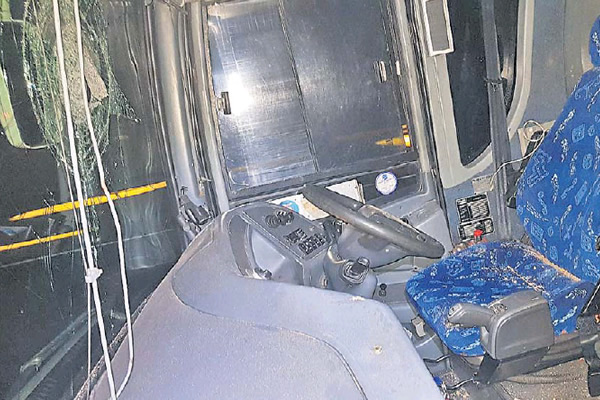 Despite shards of glass in his eyes and a head injury, an Intercape bus driver managed to get his passengers to safety after driving through a hail of rocks and bullets on the N3 near Hammarsdale.

The bus had been travelling towards Gauteng from Durban along the N3 transporting about 60 passengers when it came under fire from hidden attackers on the Hammarsdale bridge at around 8.30 pm.

The Intercape driver, who asked not to be named for fear of victimisation, said the evening had started like any other trip, until he reached the Peacevale/Hammarsdale area on the N3.

“They just starting shooting at the bus and throwing stones. I was so scared but I had to keep driving because I had to keep the passengers safe. A rock was thrown from a bridge near Hammarsdale and went through the window and hit me in the head and my right eye. I just drove. People were screaming and bullets were flying through the coach. I somehow managed to swop places with the other driver and he took over once we were away from the danger. I could not drive anymore because my eyes were sore. I was so scared. I was scared for my life,” he said.

The driver said the bus carried on as this was company policy but they were stopped by police at the Mooi River toll plaza.

Mark Winterboer of first responders to the incident Midlands EMS, said there was significant damage to multiple windows of the bus from rocks and what appeared to be bullet holes. He said Midlands EMS treated patients on scene for glass shard injuries and rushed the bus driver to hospital due to blunt force trauma to his head and glass shards in his eyes.

Winterboer said he counted what appeared to be two bullet holes but said there could have been more. “It was a miracle that no one was hit,” he said.

He added that around eight of the double-decker bus’s windows were shattered. Winterboer said Mooi-Mpofana traffic police along with the Mooi River police were on the scene.

Provincial police spokesperson Lieutenant-Colonel Thulani Zwane said the incident had been reported to the Mooi River police, however, due the bus driver’s injuries, he was unable to open a case on Monday. However, the bus driver said yesterday afternoon that he was on his way to open a case with police at the Hammarsdale police station.

Intercape said yesterday via e-mail that they were aware of the incident. As authorities are busy with an investigation they declined to comment.

“The MEC [Mxolisi Kaunda] has asked police to investigate the matter thoroughly and arrest the perpertrators with speed. At this stage, we do not want to speculate the motive but the teams of high level investigators are working around the clock.”

South African Transport and Allied Workers’ Union (Satawu) spokesperson Zanele Sabela said yesterday that the organisation condemns the “violent act in the strongest terms as it distracts focus from the core issues we are trying to achieve in this sector”.

“Having said that, it is important to note that our members have displayed the highest level of discipline throughout this strike. There is no reason to believe they are linked to this incident. Last year we had the same strike and had zero incidents. We call on the law enforcement authorities to investigate and ensure they bring the culprits to book. Our thoughts are with the bus driver who was injured in the incident. We wish him a speedy recovery,” said Sabela.