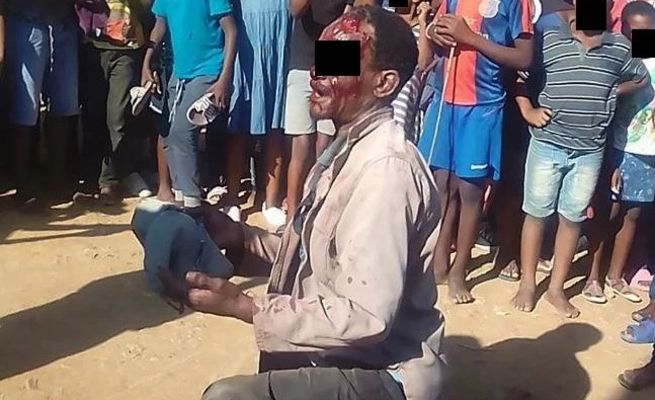 AN angry mob surrounded a madala and beat him for raping a 10-year-old girl!

Luckily, the cops rescued the innocent man and took him to hospital, where he is fighting for his life, although the mob set his shack ablaze.

And in the aftermath of this violence, it has emerged that the girl who accused him was lying.

She did not sleep at home and would not answer questions about her whereabouts. But when pressed, she said she had been raped.

Resident Pule More (38) from Dinoheng, a kasi near Maokeng in Kroonstad, told Daily Sun that the girl’s family was worried when she didn’t return home on Friday.

“We later discovered that she lied about the rape to cover up where she was on the day. Her story got out of control and it turned a vengeful mob on an innocent man.”

Pule said the madala had pleaded with residents. He swore he did nothing to the girl but it was in vain.

“They kept beating him until the cops were called and rescued him,” he said.

Another resident said: “We wasted no time when the girl claimed she was raped and knew the suspect so we took the law into our own hands.

“It’s bad to hear the man was falsely accused but we wanted to send a clear message to rapists and show them how we will deal with them.”

Police spokesman Constable Peter Kareli said a case of assault had been opened.

“During an interview with the police, in the presence of her parents, the child admitted she lied about the rape.”