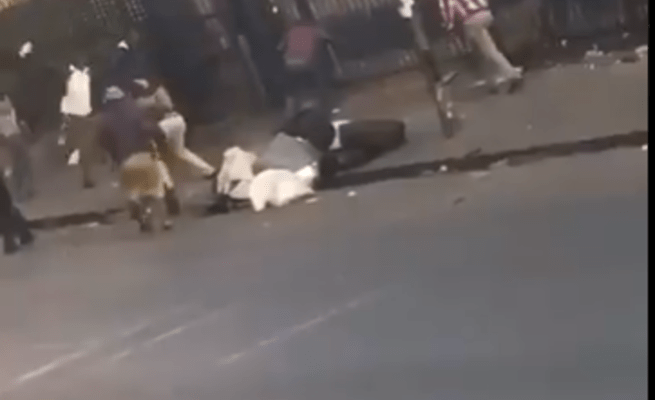 A WAR between taxi men and robbers claimed two lives in Joburg on Thursday.

According to police, three men were spotted in action by taxi drivers while robbing a 33-year-old man in Joburg CBD near corner Devilliers and Banket.

Police spokesman, Captain Xoli Mbele said a chase ensued, followed by a shootout which led to a queue marshal and two suspects shot.

The suspect who allegedly fired the shot that killed the marshal, was chased, shot and killed at the corners of Nugget and Bree Street, while the last suspect fled the scene and is still at large.

In the video circulating on social media, a man is seen firing several shots while running towards the suspect.

A few seconds later a mob of men can be seen running towards the man, when they get to him they kick, and threw stones at him while he was down.

Just when they appeared to be done with the man, one of them fired three more shots at the suspect who was already down.

Mbele confirmed that two people died, a 38-year-old suspect and a queue marshal.

“The queue marshal died in hospital. One suspect and the victim are in hospital,” he said.

Mbele also told the People’s Paper that the firearm that belonged to the dead suspect was taken by someone from the scene.

“We plead with whoever took the firearm to bring it back, because if it is recovered from them, they will be liable for all the crimes linked to that firearm.”