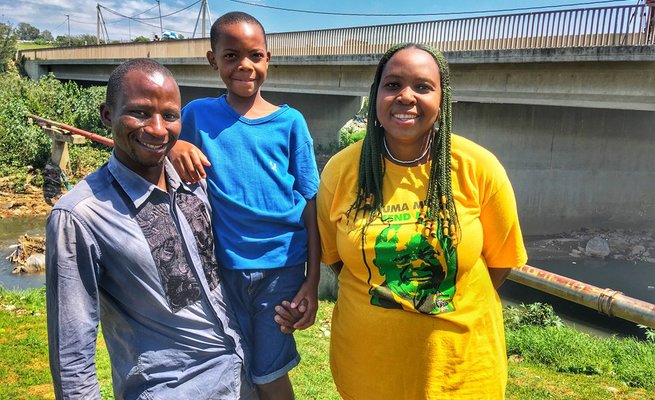 He was dared by his friend to follow him on the dangerous storm water pipe just for an experience but he panicked when he realised that the Juskei river was getting fuller by the second and he would soon have nowhere to go.

Speaking to Daily Sun Mpilo Ngubeni (9) explained that he was playing with his friend at the park when the friend said they should go play on the storm water pipes.

“He went on first and at that time there was little water on the river. By the time I was half way I saw water flowing in heavily and I just stopped walking and sat on the pipe. At that point I feared for my life,” he said.

Mpilo said instead of people helping most were taking pictures and videos of him until he saw his hero Vincent Cosa coming to his rescue.

Vincent explained to the Sun Team that he received heavenly powers to help this young boy.

I don’t know where I got the strength but I just thought to myself that somebody back home is taking care of my children and saving them from danger. Why can’t I do the same for this boy?”

Sibongile Ngobeni (39) the boy’s mother expressed gratitude towards Vincent who saved his boy.

“I am happy and relieved because if it wasn’t for Vincent my son was going to die there. People weren’t brave enough to help him but didn’t hesitate to flash out their phones, I will forever be indebted to Vincent,” said Sibongile.